Despite being the (Canadian) Thanksgiving holiday the container ship Glasgow Express was busy loading at Cerescorp Fairview Cove today. 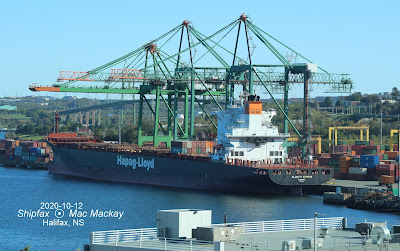 The ship arrived from Montreal early this morning, carrying no cargo - (look at the amount of hull showing!) and began to load "stranded cargo" left over from last month's longshore strike in Montreal.

It is hard to understand why there is still cargo in Halifax left over - surely there was railroad capacity for the boxes. Maybe CN wanted to be paid extra?

As reported yesterday, the ship will return to Montreal, sailing early tomorrow morning.