CMA CGM brought in another large ship on its Columbus JAX service, and as usual the ship's name commemorates a discredited explorer. 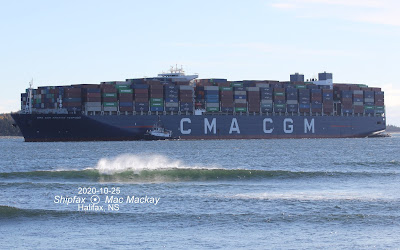 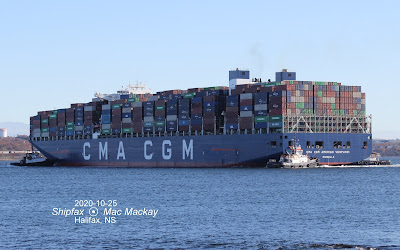 Tugs Spitfire III, Atlantic Fir and Atlantic Oak turn the ship into an offshore breeze to come alongside PSA Halifax.

The ship's namesake (b.1454-d.1512) was actually Italian (unlike Columbus who was born in Cuba, Portugal, southeast of Lisbon)  but lived in Spain and may have made two to six visits to the New World. His letters describing the voyages led to the continents of the Western Hemisphere being named for him (not to mention their current occupants). While much is unknown about the man, and much of the contents of the letters is in doubt, it is a fact that he took slaves from Hispaniola and had violent encounters with indigenous peoples. He is credited with determining from his exploration of the Brazilian coast that South America was not part of Asia, but a separate continent.