CCGC Cadboro Bay arrived in Halifax today on its delivery trip from the builders. 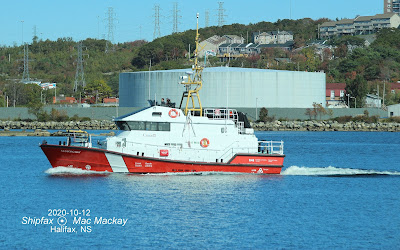 Crew use the flying bridge as the boat arrives in Halifax after a leisurely 20 knot run down the coast in ideal weather.

One of twenty new Bay class high endurance Search and Rescue lifeboats for the Canadian Coast Guard, it was built by Chantier Naval Forillon, in Gaspé, QC. As the boat's name implies, it will be based in British Columbia, (Cadboro Bay is in the Victoria area.)

Also en route from builders is Florencia Bay. Built by Hike Metal Products in Wheatley, ON, it is currently off the Gaspé Peninsula and is also destined for British Columbia via Halifax.

The 20 boat order has evolved into one boat per year from each yard. West coast boats are delivered to Halifax in alternate years. They are then loaded aboard heavy lift ships for transport to British Columbia.

The boats of this class measure 19m x 6m, have a crew of four and range of 200 nautical miles at 14 knots. They have a maximum speed of 25 knots and are self-righting.