Canada Steamship Lines' Thunder Bay arrived today to load at National Gypsum. The sun was a little more co-operative than it was in May when I photographed the ship last:   http://shipfax.blogspot.com/2020/05/thunder-bay.html 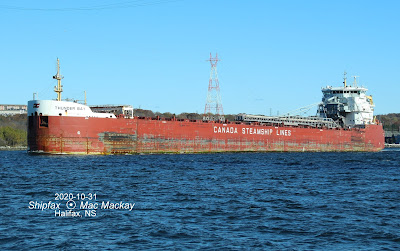 Thunder Bay in the Narrows today.

Ships of the Trillium class have now displaced the first generation of "salty/lakers" - ships built to maximum St.Lawrence Seaway dimensions but reinforced for coastal/ocean work. With the sale for scrap of Salarium (see earlier post) the only remaining ship of the first generation is Atlantic Huron, now laid up (coincidentally) in the port of  Thunder Bay, and unlikely to return to service.

Although built originally for the Lakes only, Thunder Bay and sister Baie St-Paul have been upgraded and are now regulars in Halifax and other coastal ports. Thunder Bay is arriving today from Charlottetown, where it offloaded aggregates after delivering coal to Sydney from the Great Lakes. Although exhibiting lots of "lock rash" - abraded areas on the hull from scraping along the approach walls to the locks - the ship was built for this kind of treatment.

There is an interesting video showing Atlantic Huron making such an approach: https://www.youtube.com/watch?v=lEGZMJ1aofY