The third Arctic Offshore Patrol Vessel to be built by Irving Shipbuilding Inc's Halifax Shipyard has taken another step toward completion. Yesterday, October 22, it was rolled onto the launch platform Boa Barge 37 and today, October 23, the barge was moved to an anchorage in Bedford Basin. Later today the barge will be semi-submerged and the ship floated off. The ship will return to Halifax Shipyard for additional fitting out before being handed over to the Royal Canadian Navy. When it is commissioned next year it will be named HMCS Max Bernays AOPV 432. 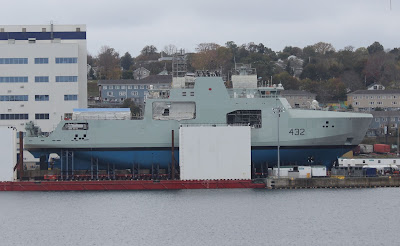 October 22, halfway onto the barge, the ship is moving on an array of Self-Propelled Modular Transporters (SPMTs). 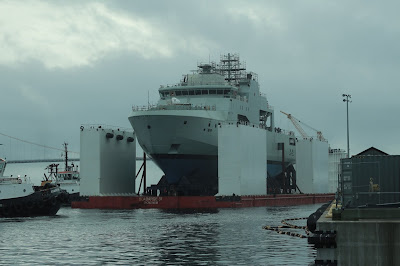 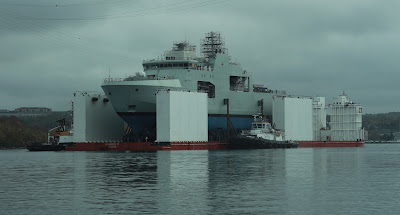 Moving through the Narrows the barge and cargo approach the MacKay bridge. 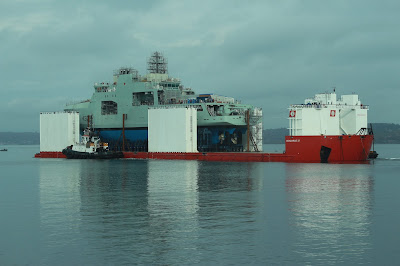 Once into Bedford Basin the barge will be anchored and the float off process will begin.

As the afternoon wore on drizzle began and intensified into rain, and darkness ensued. Therefore there was not enough light or clarity to catch the actual moment of flotation. 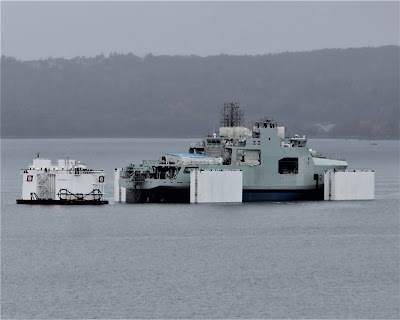 A number of small craft attended the operation, including RMI Marine's Tidal Runner, RMI Seafox and Speculator, the Coast Guard work boat CGE 316 and the tugs Atlantic Cedar and Atlantic Fir which were later joined by the Atlantic Willow.