Both container terminals hosted ships with capacity in excess of 9,000 TEU today, October 25. The first ship to arrive was ONE Hangzhou Bay at Cerescorp, Fairview Cove. 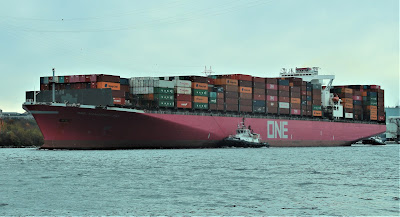 The ship is a regular caller now on THE Alliance's EC5 service. Built in 2012 as Hangzhou Bay Bridge for K-Line, the 96,290 gt, 96,980 dwt ship was renamed earlier this year and repainted in ONE colours. It was here last on September 30 and is now on the return leg. It has a capacity of 9120 TEU and was built by IH, Kure.

The South End terminal operated by PSA Halifax saw the arrival of MSC Lisbon for the first time.

It is the third ship to call on MSC's Indus 2 service. Built in 2007 by Samsung, Koje, igt is a 107,849 gt, 110,697 dwt ship with a reported capacity of 9178 TEU. That figure seems a bit low based on the ship's tonnage, but some owners are coy about actual numbers. The ship was named Santa Lucilla for a short time when built but was soon renamed.