We have lift on - updated

The United States flag (Alaska port of registry) motor yacht Infinity was lifted aboard the BBC Missouri [see yesterday's post] at Pier 27 today, October 29. The ship used both cranes in tandem with its own spreaders and straps. However there was a Dominion Diving Ltd boat standing by, probably  with divers. 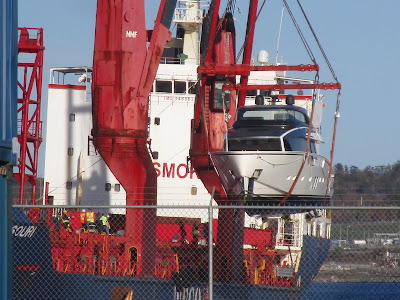 The 27m vessel was reported in Port Everglades, Florida in May, then spent some of the summer on the Great Lakes, returning via Montreal, Quebec City, Matane and Summerside to Halifax September 25.

The boat looks quite capable of returning to Florida on its own hull, but it is late in the season, so maybe it is taking an easier ride, or it may be headed farther away.

Update: According to the ship's AIS signal it is headed for Newport, RI, the "yacht capital" of the USA.