Shorter days in our latitude (roughly halfway between equator and north pole) mean that most ships arrive in darkness and now the light is fading for many departures. There was barely enough light for photographing two ships as they sailed this evening.

First off the berth was MOL Experience sailing from Cerescorp, Fairview Cove. 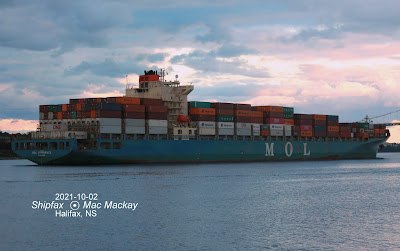 It was last here September 7 on the westbound loop of THE Alliance's AL5 service. It is now bound for Port Everglades, FL before stops in Panama and Colombia then the Panama Canal. Due to congestion on the west coast it may be skipping Los Angeles and Oakland, instead heading directly to Seattle, then Vancouver. On its return eastbound leg it may also skip Oakland and LA and may skip Halifax too on its way back to Southampton. 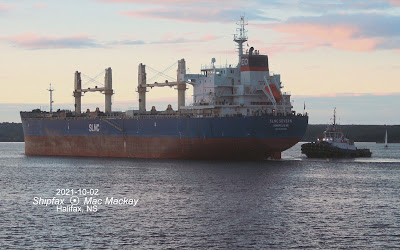 The ship arrived September 30 for fuel and for other unspecified business. The ship is now bound for Auld's Cove on the Strait of Canso to load aggregates for the United States. It is a rare US flag (non-Jones Act) ship.
.