Irving Oil has a large marine terminal in the Woodside area of the Dartmouth side of Halifax harbour.  Domestic and foreign tankers bring in refined product where it is stored in tanks onshore. It is then distributed by truck throughout mainland Nova Scotia. The product comes from Irving Oil's huge refinery in Saint John, NB or from Amsterdam, Netherlands where Irving Oil maintains a facility.

Material coming form Saint John arrives on one of the tankers Irving Oil operates under Canadian flag. Product from Amsterdam has until now arrived on foreign ships sometimes operating in a pool or as spot charters. A surprise arrival today from Amsterdam is Irving's own long term charter. New England is one of the four ships built by Hyundai, Mipo in 2005 for the Netherlands based Vroon company, also known as Iver Ships BV, and chartered to Irving Oil. Two currently operate under Canadian flag: Acadian and East Coast ex Nor'easter (i), and two under Marshal Islands flag. Those latter vessels Great Eastern and New England along with Nor'easter (ii), the former Iver Progress, operate out of Saint John, NB, servicing Irving Oil's large New England market through such ports as Searsport, Bucksport and South Portland, ME, Boston, MA, Providence, RI among others. It is therefore unusual that one of these ships can be spared for a transatlantic voyage. It might make sense if it was combined with a visit to a European shipyard for maintenance and drydocking, but in this case there doesn't seem to have been time for that as the ship sailed from Providence  September 17 (presumably in ballast) and was in Amsterdam September 28, sailing from there September 30. 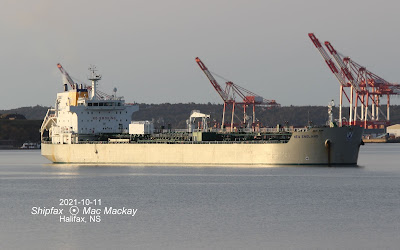 New England at anchor after a transatlantic trip.

In any event we have the rare sight of two Irving Oil tankers in Halifax at one time, as fleet mate, but Canadian flag, East Coast is already alongside at Woodside. New England will remain at anchor until the berth is free. 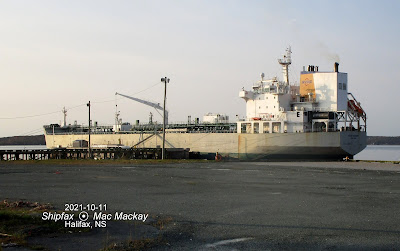 East Coast at the Woodside jetty, will sail this morning for St.John's, NL.

Since posting this earlier today, a kind reader has pointed out that the Irving Oil refinery in Saint John is closed for a seven week "turnaround" and therefore both the New England and the Iver Prosperity (another long term charter from Vroon) have been sent to Amsterdam to pick up cargoes of refined product to satisfy demand.

An Irving Oil press releases says the project, called Operation Sandpiper, costing $121 million, will employ 2,500 tradespersons in addition to the regular workforce. These "turnarounds" occur every year and vary in size and duration depending on the scope of work to be accomplished.