Aegean Eco Carriers SA operates tankers and bulk carriers. Among the latter are six sister ships with sequential numbers as part of their names. Today, October 4, the Green K-Max 5 sailed from Halifax after an over night visit. 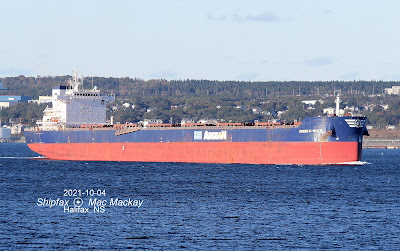 Externally, there are few signs that the ship is any different from most Kamsarmax bulk carriers. So called because they are the maximum size that the major bauxite port of Kamsar, Guinea can accommodate.

However on closer view, there is one obvious difference, and that is the absence of  a prominent bulbous bow. Ships designed for relatively high speed can improve performance by having a bulbous bow, but bulk carriers generally do not benefit much from the expense of construction. Instead this ship has other measures to improve efficiency through the water. these  include a  Samsung Asymmetric Rudder Bulb (SARB) and SAVER fins, which reduce drag. The ship also features an electronically controlled Hyundai MAN Tier II main engine that delivers high fuel economy while also reducing pollutants. It has numerous other "green" features in keeping with the company's environmental protection policies.

Built in 2020 by COSCO (Zhousam) Shipyard, it is a 44,051 gt, 80,873 dwt ship. It arrived in Halifax October 3 after delivering a cargo of bauxite from Trombetas, Brazil to La Baie, QC.  It was detained there for two days by Transport Canada, Port State Control for unspecified deficiencies. It is now heading for Norfolk, VA, most likely to load coal.