Another "extra loader" container ship arrived today at PSA Halifax. These non-scheduled ships are not assigned to any particular route, but can move loads when the regular ships are held up in other ports or where empties and other boxes are accumulating in ports with little export cargo. MSC Noa was built by Hyundai, Ulsan in 2009 as APL Texas, and was renamed Texas in 2014 - presumably after a five year charter. It became MSC Noa in 2018.

It is a 75,582 gt, 85,713 dwt ship with a container capacity of 6500 TEU. I like the tanker style bridge wings. The ship is arriving from Le Havre, France, not a usual port for MSC ships coming to Halifax. It doesn't look like it has much extra capacity.

At Autoport it was Wallenius Wilhelmsen's Thalatta, one of the HERO class of High Efficiency RoRos, with a capacity of 8,000 CEU (Car Equivalent Units). 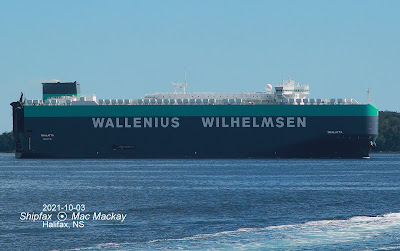 I covered this ship when it arrived in Halifax for the first time May 10, 2016  At that time the ship was wearing its original Wilhelmsen colours , but has since adopted the new combination scheme shared by both companies.

The weather was superb this weekend and boaters were out in droves, as next weekend, (Canadian) Thanksgiving, is the traditional end of the season when many seasonal boat insurance policies expire. There were sails all the way to the horizon it seemed as the tanker Quartz [see previous post] sailed from Imperial Oil. Also the Tropical Shipping vessel Tropic Hope arrived at an outer anchorage, and will wait until tomorrow to tie up at PSA Halifax. 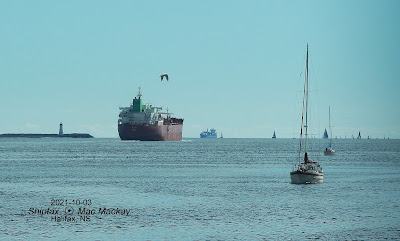 It is an unusual trip for a tanker in ballast to sail from Halifax to Quebec City. The ship does not show on the Port of Quebec schedule yet, so it is not possible to say where it will dock or what it will load.
It was also unusual that the ship moved from Imperial Oil to Pier 27 yesterday (October 2). This may have been to take bunkers, but I could not see if there were tank trucks on the pier to deliver the fuel.
.