The USC GC Tahoma sailed this morning October 10 after a three day stay in Halifax. The Kittery, ME based cutter makes occasional courtesy calls here - the last in August 2020. 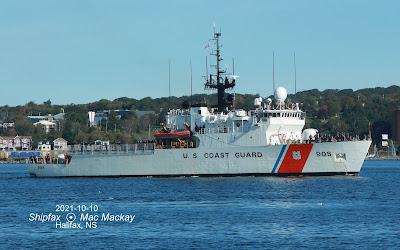 In April 2021 the ship made a Panama Canal transit to work on drug interdiction in the eastern Pacific.  The operation was carried out in cooperation with "Allies and Partners" including the Royal Canadian Navy and netted two smuggling vessels and a significant quantity of drugs. The Halifax-built HMCS Saskatoon, based in Esquimalt, was one of the participants. In early June Tahoma returned to its base after the 79 day mission.

The ship was commissioned in 1988 and carries a complement of 100. This can include specialist aircraft crew for helicopter surveillance and sniper operations.