The Port of Halifax welcomed two ships today with totally unrelated cargoes (despite the headline above.)

First in was the bulk carrier Tufty. From the Canadian Forest Navigation fleet, it is named for species of ducks. See Canfornav for more on the company.

The ships are regular traders to the Great Lakes carrying a variety of cargoes, but at this time of the year they usually load export grains. On this trip the ship departed Antwerp, Belgium September 15 and unloaded in Quebec City, Cote-Ste-Catherine and PortWeller, ON, then loaded soy beans at Johnstown, ON, to the maximum allowable St.Lawrence Seaway draft. Departing Johnstown October 19 it made good time to Halifax, arriving this morning for the start of the work day at 0800 hrs. 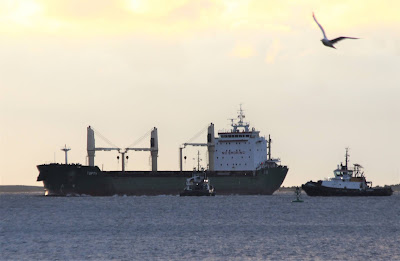 Inbound the Tufty is met by tugs, and the usual gull (which was not added by photo editing).

Built by Shanhaiguan Shipyard in Qinhuangdao, China in 2009 the 19,814 gt, 30,803 dwt ship carries three 30 tonne capacity cranes. It docked at Pier 28 (the worst place in Halifax harbour to try for a photo) and will top up its cargo which is stored in the Halifax Grain Elevator. 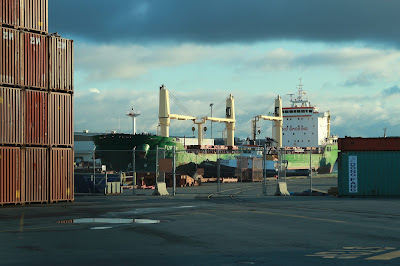 This not the first time the ship has called in Halifax. It was also here November 29, 2013, also to top up its cargo of soybeans. See Tufty


The other arrival of note was the tanker Iver Prosperity which tied up at Irving Oil's Woodside terminal. 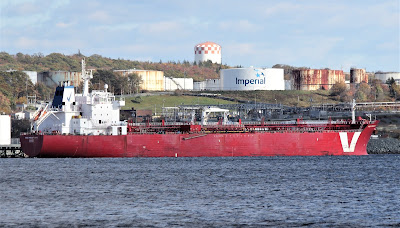 The ship is on charter to Irving Oil and usually trades between Saint John, NB and US east coast ports. However with the Saint John refinery shut down for maintenance, the ship was sent to Europe to load refined product. It sailed from Amsterdam October 6 and delivered some cargo to Saint John October 17. It then proceeded to Halifax but anchored offshore from October19 until today.

The name "prosperity" seems entirely appropriate as gasoline prices in Halifax have reached $1.47 per litre (for regular grade) - the highest in history - even though the price is government regulated.  (Canadians inexplicably insist on using the word gas to mean gasoline or natural gas, thus making for confusing conversations at times, particularly with the British and Europeans who also inexplicably use the word petrol to mean gasoline.)

Iver Prosperity dates from 2007 when it was built by Hyundai Mipo, Ulsan and measures 23,421 gt, 37,456 dwt. It is the same size as Irving  Oil's other tankers chartered from the Vroon company Iver Ships, but which were given Irving hull and funnel colours and local names. Vroon ships, including offshore support vessels, usually wear the large  "V" painted on the hull.