Unscheduled for ZIM, more reefer madness and other business

PSA Halifax, operator of the southend terminal is stacking them high these days as they are chock-a-block with boxes, particularly reefers. 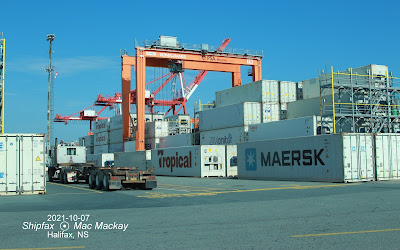 Granted it is harvest season and more perishables are passing through the port, notably potatoes, but likely all other commodities too, and possibly fish. Maersk seems to be the biggest owner. Eimskip and Tropical are also well represented, as they export and import reefer cargo through Halifax.. 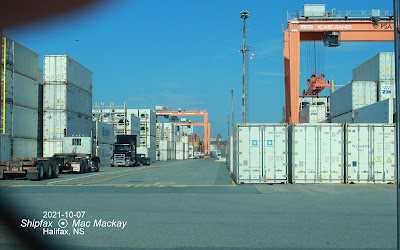 Even containers bearing obsolete names, such as Maersk-Sealand can be spotted. (That name was in use from 1999-2005 only). 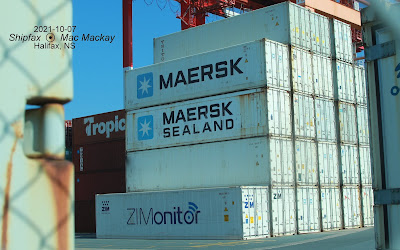 There is no lack of other non-reefer boxes at PSA too, and in order to reduce the inventory of empties, ZIM sent in an "extra loader" today - the unscheduled Seaspan Melbourne. 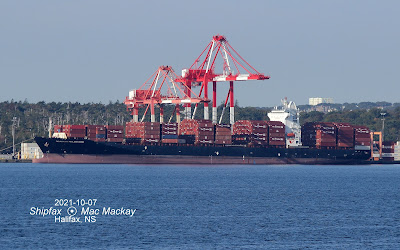 We don't often see ships with the "Seaspan" prefix, however the company is a large owner of container ships. Seaspan Corp does not operate a container line itself, but instead finances, operates and charters out ships to other shipping lines, and the ships usually adopt the nomenclature of the charterer. Thus a goodly number of their ships do call in Halifax, but are not immediately identifiable as Seaspan ships. 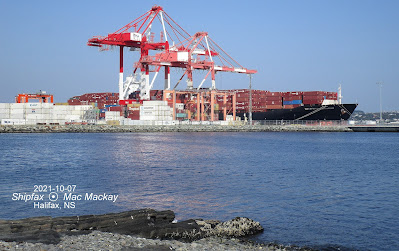 Seaspan Melbourne was built in 2005 by Samsung, Koje, as CSCL Melbourne for long term charter to China Shipping Co Ltd. When that charter ended in 2018 the ship was renamed and chartered to Korea Marine Transport Containers for about a year, then to ZIM.  It is a 39,941 gt, 50,797 dwt ship with a capacity of 4250 TEU including plugs for 400 reefers.

It appears to have been taken off the Asia Gulf Express service (via Suez) and on this trip the ship sailed from Chinese ports in early September, worked its way transpacific through the Panama Canal September 26, and then called in Norfolk and New York. It seems to be headed for ZIM's hub port of Kingston, Jamaica next, loading ZIM boxes (and container leasing company boxes) exclusively. The ship's draft indicates that most of its cargo is empties. 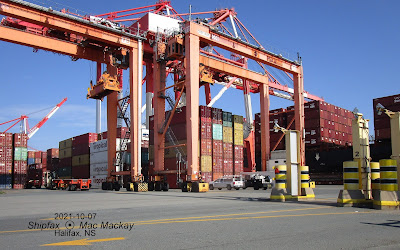 Far right in the photo - a glimpse of the ZIM boxes on the ship.

There was other business in the port too: 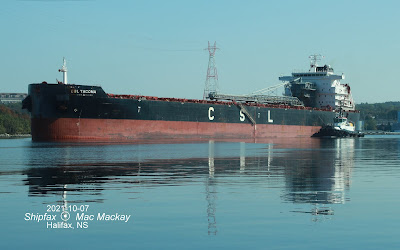 CSL Tacoma gliding through the Narrows with the tug Atlantic Willow on its way to Gold Bond Gypsum disturbed a glassy calm, despite a noticeably falling tide. 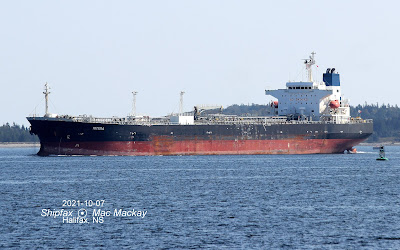 Mitera made a return visit (it was last here August 30). This time the ship is arriving from Saint John, NB with a small cargo of refined product for Irving Oil. It unloaded most of its cargo from Amsterdam in Saint John early this week before coming to Halifax, the reverse of its last call.