The Mediterranean Shipping Company (MSC) has now included Halifax as a stop on its Indus 2 service, linking ports in India with east coast North America. Today (October 5) marked the first arrival, MSC Stella. The ship sailed from Mundra September 7, subsequently calling in Nava Sheeva, Gioia Tauro (Italy) and Sines (Portugal). After its stop here it is scheduled for Norfolk, Baltimore, Miami and Freeport (Bahamas) before sailing back to Mundra (via Suez). 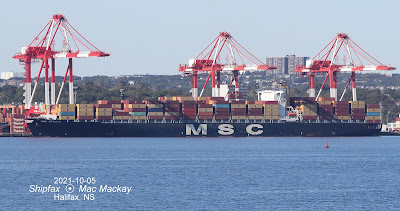 It was not the only ship at PSA Halifax today, as the ZIM Vancouver was working at Pier 42. 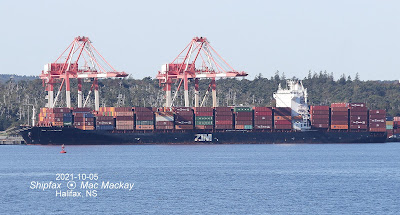 Built in 2007 by Dalian New Shipbuilding Industry Company, it is 39,906 gt, 50,532 dwt ship with a capacity variously reported as 4250 or 4225 TEU. It carried the name Pearl River I from 2007 to 2012. It has been calling Halifax for several years on the ZIM ZCA service (ZIM Container Service Atlantic), which operates also for HAPAG-Lloyd as its Atlantic Loop AL7 service, which is a Mediterranean / North America east coast route, with weekly calls at a dozen or so ports.