In from the cold

Recent warm weather may be cause to forget that there is cold weather ahead. However two of today's arrivals have put the cold weather behind them - at least for a while.

CCGS Jean Goodwill returned to its base at the Bedford Institute after its first season in the arctic for the  Canadian Coast Guard. 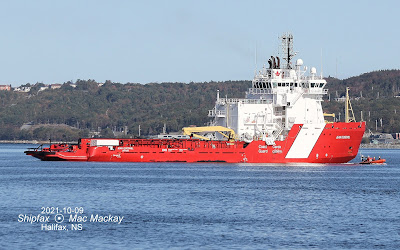 The former icebreaking / anchor handling tug/supplier, Balder Viking has been upgraded for Canadian Coast Guard use, although that work may not be entirely complete. Built in 2000, the 18,020 hp ship is considered an "interim" solution to icebreaking needs until new vessels can be built.

Today's other arrival from the north is of a similar age, but is larger and vastly more powerful. The USCGC Healy WAGB-20 was commissioned in 1999 and develops 46,350 hp. 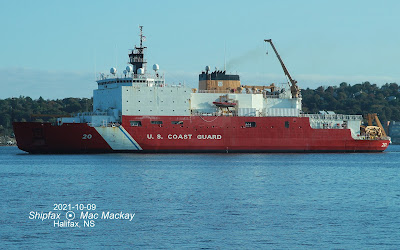 It is arriving in Halifax having made a Northwest Passage from its home base in Seattle. This is the ship's second visit to Halifax. The first was in the year 2000. It will now return to Seattle via the Panama Canal. While en route it will pass the HMCS Harry DeWolf AOPV 430 which has recently completed its own Northwest Passage from east to west, arriving in Esquimalt October 4. It will be returning to Halifax via the Panama Canal too.
While Harry DeWolf is in full service as the first of the RCN's Arctic Offshore Patrol Vessels, the second, Margaret Brooke AOPV 431 is alongside HMC Dockyard. AOPV 3 to be named Max Bernays AOPV 432 is under construction at Halifax Shipyard. 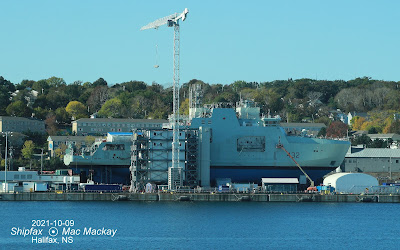 Launch date for the ship has not been announced yet, but that is expected soon after October 15 when the coasting license for Boa Barge 37 kicks in. (It is used as the launching platform.)

On this visit to Halifax USGC Healy is tied up at HMC Dockyard. But back in the pre 9/11 days of April 2000 the ship berthed at Pier 20, with minimal security. 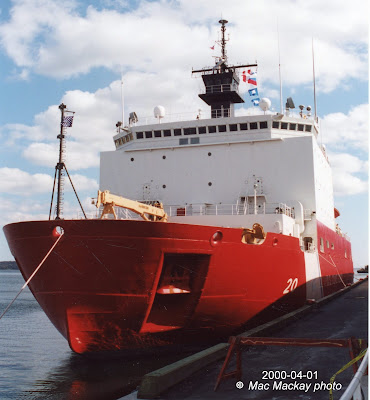