The container ship Vivienne Sheri D arrived today October 8, on the eastbound leg of its regular trip from Iceland to Portland ME, via Argentia and Halifax, and return. This is the second rotation since the ship changed its name (from Pictor and before that Pictor J) and made its first call September 13, 2021 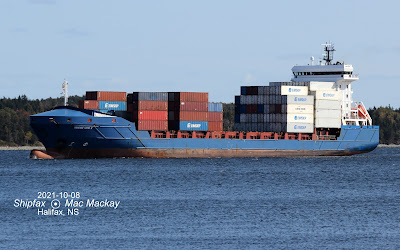 Since that first visit the crew has had time to paint the ship's new name on the bow (it is an awkward place to reach). The name reflects the new Canadian owners, Doornekamp Shipping Ltd, of Odessa, ON. They have purchased the ship but will continue its charter to Eimskip and stay with F+L Schiffahrts, its German managers, while ship sails under Antigua and Barbuda flag. In about two years time when the charter ends they may reassign the ship. In its present arrangement it also operates a New England feeder service for CMA CGM on the Halifax / Portland / Halifax leg.

Doornekamp has also recently inaugurated a container service called Cleveland Europe Express (known as CEE Way) serving the  Great Lakes from Antwerp in cooperation with the Dutch company Spliethoff using another of their ships, the Peyton Lynn C. Depending on cargo demand the ship may call at intermediate ports, including Doornekamp's Picton Terminal. That service is expected to use Halifax  in the winter when the St.Lawrence Seaway is closed.

On the eve of Canadian Thanksgiving weekend Canada's naval memorial Sackville winds up its summer tourist season and moves (with tug propulsion) from Sackville Landing to HMC Dockyard. It is also an opportunity for a short trip to a position off Point Pleasant Park for a salute to the War Memorial and sometimes a committal of ashes. 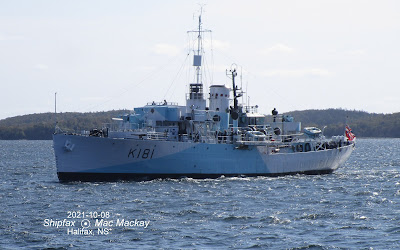 Sackville looks quite jaunty as it returns from Point Pleasant. With only the mast of the tug Glenevis showing it is not hard to imagine the vessel as it appeared during World War II service.

After a major hull rebuilding over last winter, Sackville is now assured of many more years of service as a largely static display, open to the public. 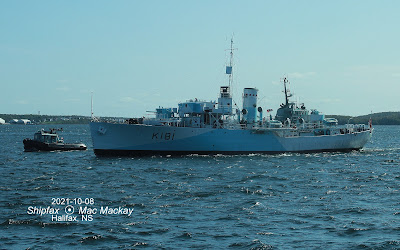 The "pup" tug Listerville provided an escort off the bow, as Glenevis provided power. There was also a RHIB motor boat in company.