A Touch of Winter Weather

A major storm passing through the region over the last two days (November 22-23) caused many delays to arrivals, departures and work in the harbour. Extreme high winds, with gusts up to 90 kph and wave measurements in excess of 5 meters in the harbour approaches caused the Atlantic Pilotage Authority to suspend pilotage services November 23 until this morning November 24. Driving rain reduced visibility and dropping temperatures resulted in thin crust of snow and ice to form on cold surfaces.

The Canadian tanker Qikiqtaaluk W, which arrived at Imperial Oil from Montreal on November 21, opted to go to anchor in Bedford Basin instead of putting out to sea on November 22. 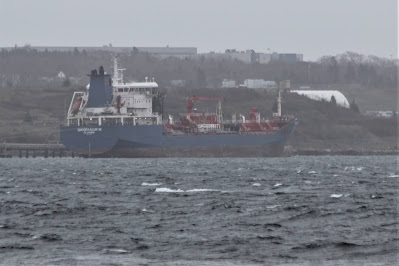 After a summer spent supplying fuel to arctic outposts, the ship, operated by Coastal Shipping (Woodward Group) of Goose Bay, had company as the new Arctic Offshore Patrol Vessel Margaret Brooke carried out trials in the relative shelter of the Basin. Mist, in advance of the driving rain reduced visibility. 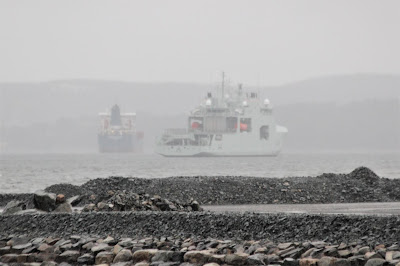 The tanker finally sailed this morning, November 24, for Sarnia, ON for another cargo.

Ships heading for Halifax had to remain at sea and were tracked steaming up and down the coast as far southwest as the Yarmouth area. 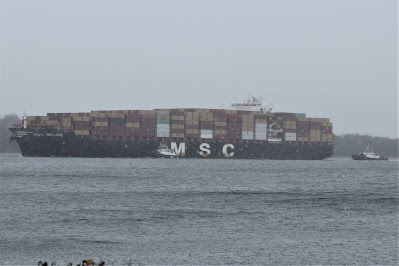 MSC Meline arrived off Halifax November 18 and anchored November 20, but as conditions worsened it put out to sea again. It steamed south and hove to possibly avoiding the worst of the weather, finally boarding a pilot this afternoon (November 24). Last night it was south of Cape Sable Island, almost in the Gulf of Maine.

The ship is an unscheduled "Extra Vessel" and is arriving from Le Havre and Rotterdam, appearing to be fully loaded, but not on one of MSC's regularly scheduled routes.

Once conditions improved this morning Algoma Verity was the first to arrive, tying up at Gold Bond Gypsum. Other scheduled ships will be arriving over the next few days including MSC Silvana on the Indus 2 service. Ships that have been in port, and delayed departing due to weather will be sailing over night. The Hapag-Lloyd ship Molly Schulte will be sailing from Fairview Cove this evening. And later tonight the cargo ship Ijsselborg is due to sail after unloading a cargo of rail from Poland. 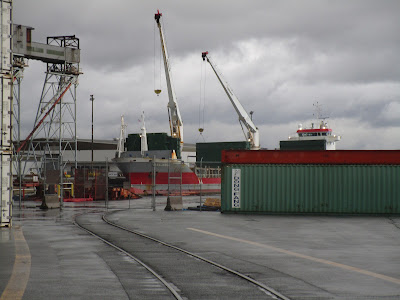 The Netherlands flag ship was built in 2010 by Damen Yichang in China. It is a multi-purpose vessel with moveable tween decks and measures 8999 gt, 12,016 dwt. It used its own gear to unload the rail at Pier 27. Built as Ijseelborg it was renamed 2011: Onego Houston, 2011: Isselborg, 2012: Clipper Alba, 2015: Nordana Sarah and 2015: Ijsselborg. It carries the distinctive Royal Wagenborg paint scheme of grey with a broad red stripe. it is unfortunate that a better view was not possible from the land side.

An even worse view (if possible) does show the ship unloading the rail, and some dock workers arranging it in stacks. The rail is stored on the pier and sent out on special rail cars as CN Rail requires it. I understand the rail goes to Winnipeg where it is prepared for installation. 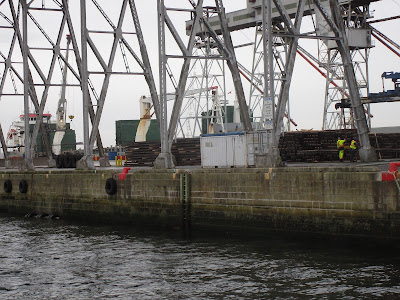 Main line rail is continuous welded, so the forty foot sections which arrive by ship are joined in the Winnipeg shop.