Briese Schiffahrts operates a large fleet of ships trading world wide. Numbering in excess of 160 vessels of various sizes, the fleet consists of some ships owned by Briese but many are managed for other owners, such as Desgagnés. Briese's operating entities include BBC Chartering and BBC Heavy Lift .

Today's arrival, BBC Europe is one of the heavy lift ships, and is equipped with a pair of 250 tonne capacity cranes that can work in tandem for a 500 tonne lift. Built in 2003 by Tianjin Xingang, in China, it is a 7014 gt, 7409 dwt multi-purpose ship with moveable tween decks and can also carry bulk cargoes and is rated for 599 TEU with 60 reefer plugs. 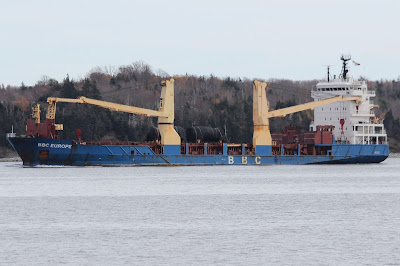 The BBC Europe has some cargo on deck, but it is heavily tarped and not possible to identify. Shore cranes are set up on Pier 27, so it is likely that whatever it is will be landed by the ship's cranes then loaded on rail cars.

I will update this post if I learn more about its cargo.

The BBC Europe instead went to anchor. As of late afternoon November 12, the launch Captain's Pride was alongside: 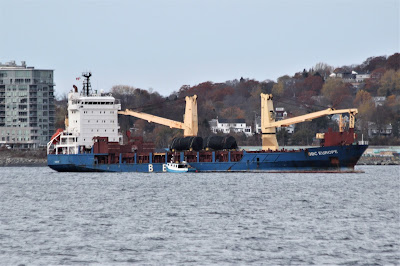