Another day, another Algoma. After yesterday's two Algoma ships, there were again two today,  November 27, with Algoma Integrity arriving for another load of Gold Bond gypsum. 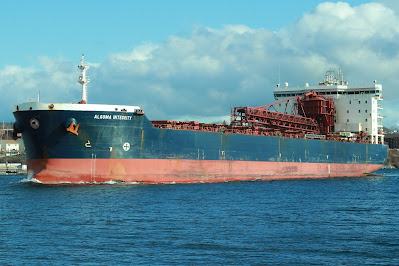 Purpose built to serve CGC (Canadian Gypsum Corp) the Canadian branch of US Gypsum, in 2009 by EISA-Ilha, Rio de Janeiro, the ship was originally called Gypsum Integrity and was owned by the shipping subsidiary Fundy Transportation. When USG closed its operations in Hantsport and Grand Narrows, NS, the ship 's managers, Beltships Ltd, found work for the ship and its sister Gypsum Centennial in Africa, shuttling iron ore to larger bulk carriers in Sierra Leone.

Algoma Central Corp acquired and renamed the ship Gypsum Integrity in 2015 and operated it under Canadian flag for two years until new ships were completed. It was then registered in the Bahamas and placed in the CSL Americas pool of self-unloaders. It continues to carry gypsum, but also carries coal and aggregates. It has become a regular caller in Halifax for Gold Bond (formerly National Gypsum) the direct competitors of its first owners. 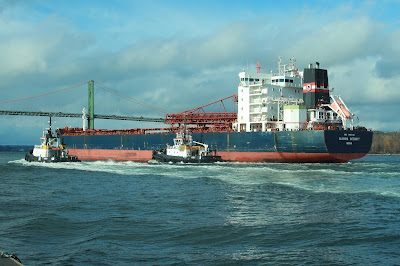 The tugs Spitfire III (aft) and  Atlantic Willow (forward) make up to the ship as it passes Pier 9 in the Narrows bound for the Gold Bond dock in Bedford Basin.

When I checked up on the other Algoma ship, the Radcliffe R. Latimer at Pier 26 this morning, it was not unloading its grain cargo - possibly due to off and on rain showers. 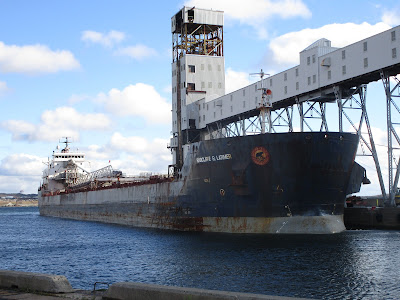 (See yesterday's post for a photo of the ship with its boom swung out for unloading.)