Algoma Central Corp has become a major shipping operator in recent years. After nearly a century serving the Great Lakes it expanded its bulk carrier activity to international waters through its participation in the CSL self-unloader pool. It also moved into the tanker business, acquiring, then upgrading, Imperial Oil (Esso)'s domestic fleet. It has also formed NACC, Nova Algoma Cement Carriers, in a joint venture with the European operator Nova.

Algoma has now been present in Halifax on consecutive days November 25 and November 26.

On Thursday November 25 the Bahamas flag self-unloading bulk carrier Algoma Verity sailed for Tampa, FL, with a load of gypsum for Gold Bond. 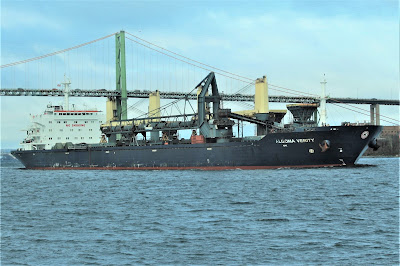 Built by Shanghai Shipyard in 2000 as Alice Oldendorff, the ship was acquired by Algoma in 2019 when Oldendorff exited from the CSL pool. Constructed as a conventional bulk carrier, the ship measures 28,747 gt and 50, 259 dwt. It was immediately retrofitted by Krupp Fordertechnik with a system of conveyors and hoppers. Ship's cranes fitted with grabs, move cargo from the holds to hoppers and conveyors transport the material to the unloading boom which swings out overside to deposit the cargo on shore.

The Krupp system was a way to maximize carrying capacity since most self-unloaders sacrifice hull space for sloping tank tops to direct cargo to belt tunnels. They make up for reduced capacity by rapid discharge and therefore more voyages. However for some trades slightly slower discharge rates can be offset by more cargo capacity per trip, and that is what Oldendorff and Thyssen Krupp had in mind for this system, which retains the conventionally shaped holds.

On November 26 the Canadian flag self-unloader Radcliffe R. Latimer arrived with a load of grain from Thunder Bay. The rare grain delivery by ship will likely be the only one this year before the St.Lawrence Seaway closes for the winter. 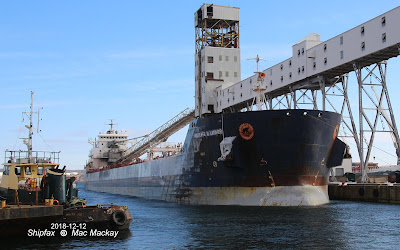 In this 2018 photo, the ship is tied up at Pier 26 unloading into the conveyor system that leads to Halifax Grain Elevators. Most grain that arrives in Halifax is for domestic use as feed or for processing at P+H Milling for flour. Grain exports are rare, but ships do sometimes "top up" in Halifax if they loaded grain at Great Lakes or St.Lawrence River ports.

The Radcliffe R. Latimer was built as the Algobay to maximum St.Lawrence Seaway dimensions by Collingwood Shipbuilding in 1978. It was built to Nova Scotia class, allowing for short sea trips outside the normal limits of Great Lakes bulkers. In 1987-88 it was upgraded to Caribbean class, allowing for extended sea trips. It operated under foreign flag under charter to Beltships from 1990 to 1992 and to CSL as Atlantic Trader from 1994 to 1995, and under Canadian flag to 1997. Its career appeared to be at an end in 2002 when it was laid up in Toronto. However in 2007 Algoma moved the ship to Hamilton where it was prepped for an ocean tow.

In 2008 it was towed to China, via the Suez Canal where a new foreboady was grafted on by Chengxi Shipyard. The existing aft section was much modernised with a new bridge and equipment. It then returned to Canada in 2010 under its own power via the Pacific Ocean and Panama Canal. It was renamed Radcliffe R. Latimer in 2012 and has been an off and on caller in Halifax ever since, sometimes bringing in grain, and loading gypsum for Canadian ports.