The unusually named Dee4 Dogwood arrived in Halifax this morning, November 21 from Amsterdam. The ship anchored for a few hours until the Acadian sailed from Irving Oil's Woodside terminal, then it moved in to unload. 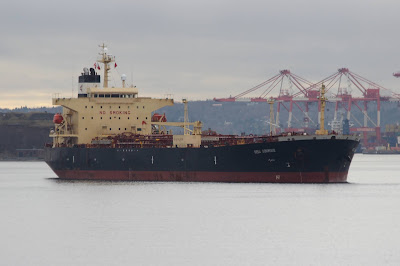 A MidRange tanker of 26,900 gt, 47,399 dwt, the ship was built in 2008 by Onomichi Zosen in Japan. Its tanks are coated in epoxy and it has stainless steel heating coils, allowing it to carry a variety of chemicals in addition to refined petroleum products. It started life as the Nord Organizer, and took its present name in 2020 when it was acquired by the Danish Dee4 Vessel Co 4 K/S.

Dee4 Capital Partners is a Copenhagen-based investment fund manager with thirteen ships in its portfolio, each owned by a single ship company and each named for a species of tree. Management of the ships has been entrusted to the mammoth company Hafnia Tankers (part of the BW Group) , also Danish, which operates more than 200 tankers. Parent BWGroup in turn claims more than 400 ships (including Hafnia) under its management. 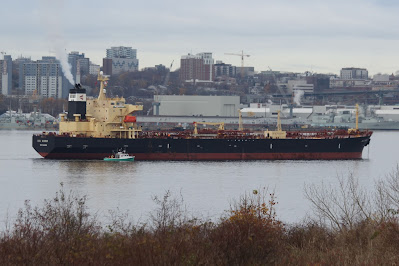 A stylized Danish flag forms part of the funnel mark of the ship, which is registered in Denmark under the Danish International Register.

Once the ship was brought up at anchor the launch Dominion Pursuit went out with an agent or inspector. The usual Dominion Diving launch, Dominion Bearcat was working with a barge in Dartmouth Cove. 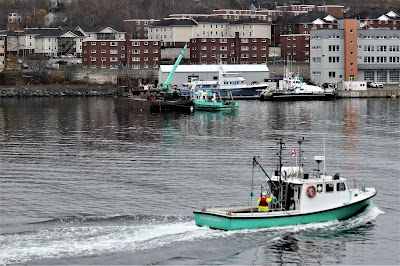 Dominion Pursuit outbound from Dartmouth Cove passes fleetmate Dominion Bearcat which has the barge Dominion Mercury doing some crane work off the C.O.V.E dock where a new jetty is under construction.

Alongside  the C.O.V.E. dock (Centre for Ocean Ventures and Entrepreneurship, the former Coast Guard base) are the Ocean Seeker (black hull) and Belle Isle Sea (blue hull).

More on the Dominion Pursuit:

Measuring less than 15 gros tons (13.64 gross tons, in fact) the boat is not required to be registered by name, only by registry number, which is C15244NS. The boat was built by Atelier Maritime Tilly (AMT) in St-Antoine-de-Tilly, QC for the Department of Fisheries and Oceans. It was given an unofficial name, which I believe it was Denis Riverin (it may also have been Louis Bérubé). Dominion Diving acquired the boat in about 2007. It is used as a launch and diving tender in Halifax harbour. 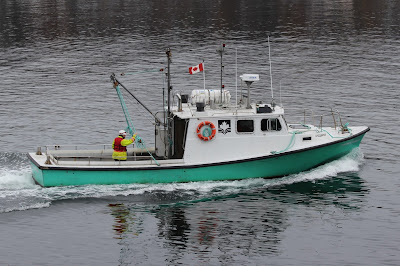