Most car carrying ships spend very little time in port. They arrive and sail within a working day, since they can discharge cars at a high rate of speed. Some car carriers stay a little longer since they also have cargo to unload, which is not handled by Autoport. (Autoport is owned and operated by CN Rail, and thus handles mostly cars that will be forwarded by rail.) To discharge the other cargo the ships go to Pier 30-31, which us now within the operating area of PSA Halifax. That cargo is usually RoRo and consists of various kinds of machinery, but sometimes also oversize or heavy loads. It is also discharged rapidly, and therefore the ship can usually come and go in a day.

The most recent car carrier to call in Halifax ended up staying in port for a day and a half. Morning Peace arrived early in the morning of November 17 and sailed in the early afternoon of November 18. Its first berth was at Pier 30-31 where it spent the morning, then moved to Autoport in the early afternoon. As stated, a 24 hour stay at Autoport is unusual, so I image the ship did not work an evening or night shift, but instead two half days. 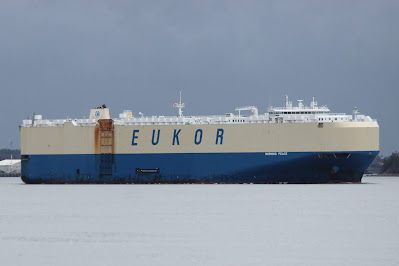 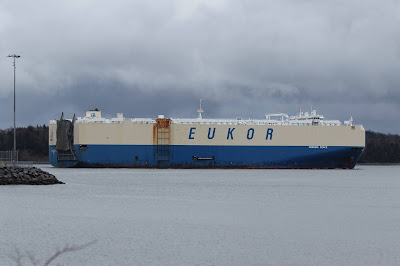 The ship is owned by Eukor Car Carriers, and managed by Wilhelm Wilhelmsen. It is en route from Southampton, UK to New York.