There was a fair amount of activity in the harbour today (Aunday, August 28), including an abundance of pleasure craft. The last weekend before Labour Day weekend (which marks the traditional end of summer) is always a busy one for boaters - weather permitting. And this weekend weather was nearly perfect, with warm temperatures, light winds and lots of sun. That also meant ideal conditions for ship watching.

The Lake Wanaka arrived early this morning at Autoport from Emden, and sailed this afternoon for Davisville, RI weaving its way through small craft without incident. 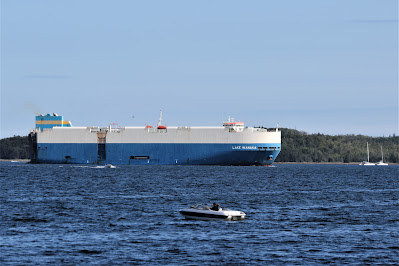 The Lake Wanaka was here March 30 of this year, and Shipfax reported its unusual movements and technical details. The 46,800 gt, 12,272 dwt PCTC was built in 2008 by Xiamen Shipbuilding Industry Co and has a capacity of 4902 CEU. The ship sailed under the name Triumph until 2019 when it was renamed after a lake in New Zealand. Since new it has been managed by Eastern Pacific Shipping UK, a 200 ship strong operator for many owners - some with uninformative corporate names.

Following it in was the Vayenga Maersk from Antwerp en route to Montreal, and docking at Pier 42, PSA Halifax Atlantic Gateway (a.k.a. the southend terminal). 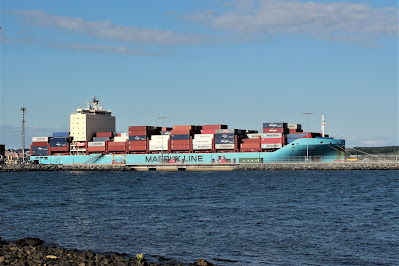 Shortly afterwards its route mate CMA CGM Montreal arrived at mid-berth Pier 41-42 from Montreal en route to Europe. The two ships (along with EM Kea and Vistula Maersk) operate the weekly joint Maersk/CMA CGM St.Lawrence service, and usually call in Halifax to top up (eastbound) or lighten (westbound) because of St.Lawrence River draft restrictions. Because of the many containers on the pier the CMA CGM Montreal was hidden from view.

Another arrival this morning was the Canadian tanker Algoterra from Sarnia, ON, docking at Imperial Oil, number 3 dock.(It is the only operational dock at Imperial Oil - docks 4 and 5 are still there but not in use. Docks 1 and 2 were demolished many years ago.)

Ships usually dock starboard side to at the oil dock (bows north) but for some reason Algoterra tied up bows south- thus an unusual photo angle. The harbour tour boat Silva of Halifax is just rounding George's Island on one of its regular outings with a full deckload (of people).

Algoma ships are usually painted a very dark blue, but Algoterra is the exception to the rule. It had very nice paint from original owners Knutsen Produkt Tanker of Norway when it was acquired in 2019, so presumably Algoma Tankers saw no reason to replace a perfectly good coating. The ship was built in 2010 by Jiangnan, Shanghai as Louise Knutsen. The 11,889 gt, 16,512 dwt ship was renamed Louise K. briefly in 2019 for the delivery trip to Canada. The paint is looking a bit faded now, but its next class renewal survey and drydocking is not due until March 2025 so it may not see new paint until then. 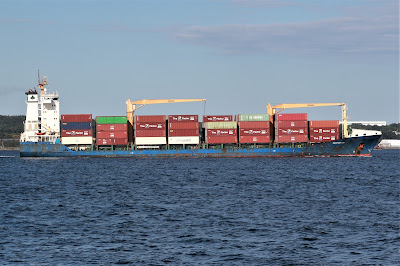 The giant container ship CMA CGM Alexander von Humboldt sailed early this morning from the southend terminal. Shipfax was not on  scene this time, but covered the ship on a previous visit on December 27, 2021.

There was one more container ship to deal with, but at the other end of the size scale at 354 TEU (including 100 reefer plugs). The 3871 gt, 3650 dwt Vantage which has been sailing for Eimskip, arrived from Reykjavik on Friday August 26. It was to have sailed that evening, but remained in port overnight and moved Saturday morning to Pier 36. Although that pier is within the PSA Halifax Atlantic Gateway facility, it is not served by a container crane, so the ship cannot be working cargo.

The ship started calling here June 11, 2022 on Eimskip's Green Line from Iceland to Argentia, NL, Halifax and Portland, ME. It is currently not showing on any future Green Line schedules, but appears to be carrying a deck load. (Those are just reflections on the bow - not damage.) 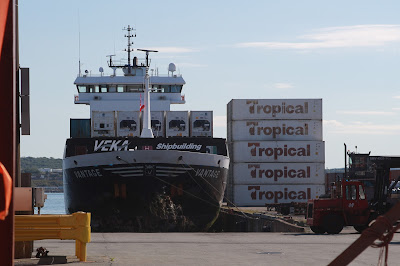 Despite the stacks of Tropical Shipping boxes on the dock, the Vantage is sailing for the Icelandic company Eimskip (and from the opposite direction).