There was all sorts of shipping activity in Halifax today, August 29, - here is a sampling:

There were two cruise ships alongside at Pier 20 and Pier 22, both regulars, the Zaandam and the Celebrity Summit, respectively.

The larger of the two is the Celebrity Summit built as the Summit in 2001 and renamed by Celebrity Cruises in 2008. Chantiers de l'Atlantique in St-Nazaire built the ship, which has since been upgraded and now measures 90,940 gt with a passenger capacity of 2,218 (all berths), 2,158 (lowers only) and a crew of 999.

It sailed this evening for Boston, giving shipwatchers a close up view as it went west and north of George's Island. Waterfront buildings presented a shadow show on the ship's hull. 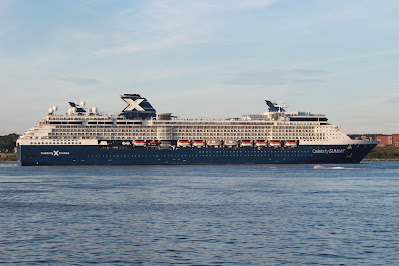 There were other arrivals and departures today too. Eimskips's Skogafoss put in en route from Reykjavik to Portland, ME. 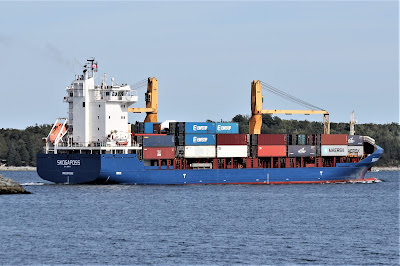 It will be interesting to see what happens tomorrow when fleet mate Vantage, which was also en route to Portland, moves from Pier 36 to Pier 42. (See yesterday's post).

An early evening sailing was the Augusta Sun en route from Cuba to Spain. It arrived Saturday, August 27, and unloaded bagged nickel sulfides. At least some of the cargo seems to have been loaded directly to rail cars, instead of being stored in a transit shed. Many more open gondola rail cars are awaiting cargo on nearby sidings. 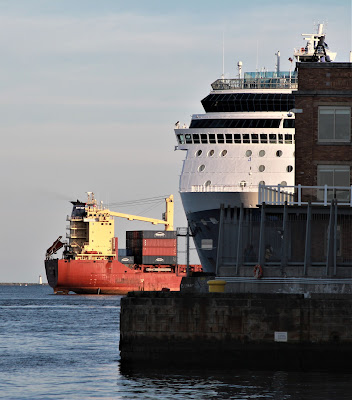 The Augusta Sun backed out of Pier 27 as the Celebrity Summit was getting underway. 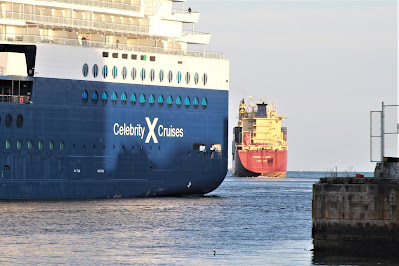 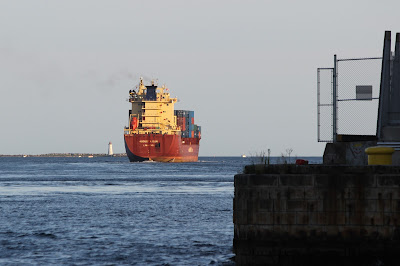 There was another vessel of note that wandered in front of my camera and there is a story behind its odd name: Viva Knievel. 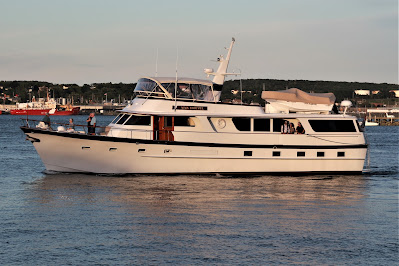 The boat was ordered by the owner of Broward Marine in about 1975 or 76, but acquired "in the stocks" by none other than the American daredevil Evel Knievel. Renamed Evel 1 it was then lost in a poker game to Jay Sarno, the owner of the Caesar's Palace gambling den in Las Vegas. Renamed Bottom Line it was sold in about 1980 to a Florida owner who lavished great care on the boat, employing a full time year round crew.

In 2020 the Halifax based automobile dealership tycoon* Rob Steele bought the boat in Fort Lauderdale,  and renamed it after a 1977 movie starring his childhood hero. Steele uses the boat for pleasure cruises, but it is also home to his Evel Knievel memorabilia collection and is a sort of shrine to the stunt jumper.

[* Full disclosure - the official Shipfax harbour watching vehicle was acquired from Steele Ford of Halifax, one of scores of dealerships of all brands (57 at last count),  collision centres, and power centres, owned by the Steele Group in Canada and in the US. Shipfax is not otherwise affiliated with the Steele Group.]