There were two Holland America Line cruise ships in port today, August 25, and both sailed in the late afternoon.

First to go was Zaandam one of  the most frequent callers in the cruise season. 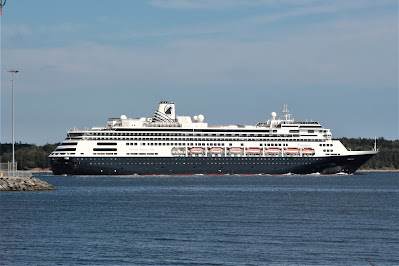 The second HAL ship was the newer and larger Nieuw Statendam which which was built by the same shipyard, but in 2018. 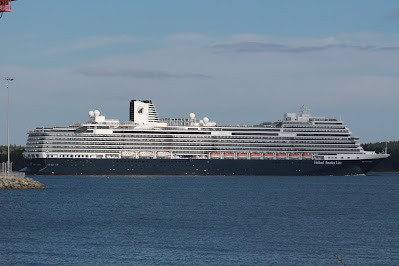 There was also activity at PSA Fairview Cove, with a departure and an arrival. The ONE Houston arrived in misty conditions yesterday afternnon and should have sailed this afternoon for New York on THE Alliance's EC5 service (Asia to North America via Suez Canal). Its berth was to be taken by NYK Nebula on THE Alliance's AL5 North Europe to North America). However as it turned out ONE Houston did not depart for New York until late evening and NYK Nebula had to wait in Bedford Basin. I hope this pattern (see also yesterday's post) is not going to be typical. Halifax has had a reputation for efficient and quick cargo operations. 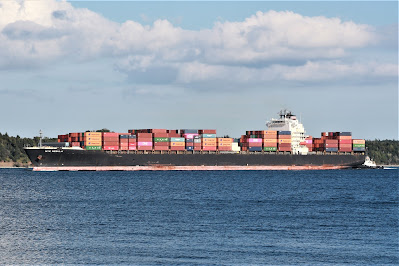 NYK Nebula arrived on time from Caucedo, Dominican Republic on the east bound leg toAsia via the Suez Canal. The 55,534 gt, 65,600 dwt ship dates from 2007 when it was built by Hyundai, Ulsan.It has a capacity of 4922 TEU. 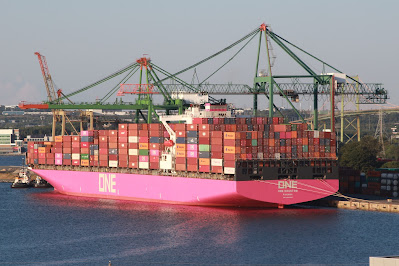 NYK Nebula went to anchor and its tugs moved over to stand by for the ONE Houston when needed.

Also at Fairview Cove was the Nolhan Ava on its weekly container and RoRo run between Halifax, Argentia, NL and St-Pierre et Miquelon for TMSI. It occupied the west berth which has a RoRo ramp. 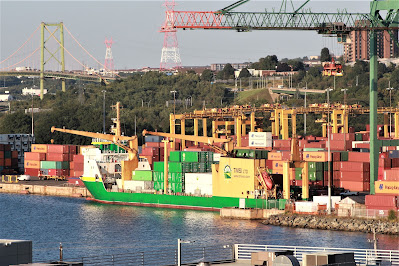 The Canadian flagged Nolhan Ava is scheduled to depart on Friday evening (August 26).