A pair of container ships arrived today and coincidentally, they both had blue coloured hulls. Not the famous Maersk blue however, but darker shades. 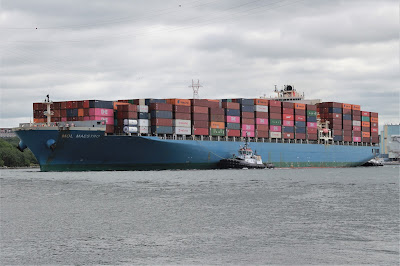 First in was the MOL Maestro wearing the attractive blue that Mitsui OSK Lines have carrried for years. Built in 2010 by Mitsubishi Heavy Industies Ltd in Kobe, the 78,316 gt, 79,423 dwt ship has a capacity of 6724 TEU including 500 reefers. It arrived from the far east (last port Colombo July 19-20) via Suez on THE Alliance's EC5 service. It docked at Fairview Cove and will sail over night for New York. 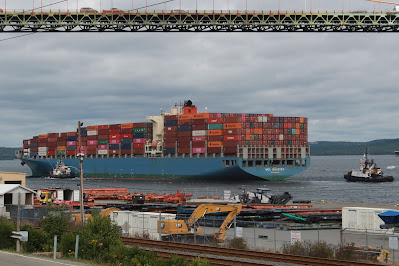 So far the MOL ships that operate for THE Alliance have not been repainted or renamed in the ONE theme. This may be because the ships, such as this one, are owned by offshore investors, registered in Panama and chartered to MOL. The ship has been a regular in Halifax sonce 2020 and was last here in June on its regular route from Singapore to the east coast of North America.

The second blue arrival is a first time caller in Halifax, and is also a charter, so is wearing the colours of its owners - not the shipping line it is working for. 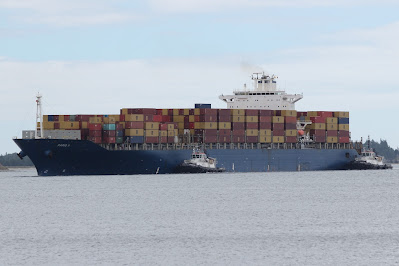 Paris II is part of the CONTI fleet from Hamburg, since 2017 part of the Claus-Peter Offen group. It was built in 2001 by Hanjin Heavy Industry + Construction Co in Busan as CONTI Paris but was quickly renamed CMA CGM Balzac. In 2015 it was named CONTI Paris again and carried that name until 2021 when it became the Paris II, under NSB Niederelbe management, and chartered out to MSC.

A 73,172 gt, 77,941 dwt ship, it has a capacity of 6477 TEU including 500 reefers. The ship arrived on MSC's Indus 2 service from North India via Suez, the Mediterranean ports of Barcelona and Valencia, and Sines, Portugal.

It is amazing that despite its huge buying spree over the last two years, MSC still needs charters to fill its schedules. It has been reported that MSC has bought more than 100 ships since August 2020, costing more than $6 bn (USD).