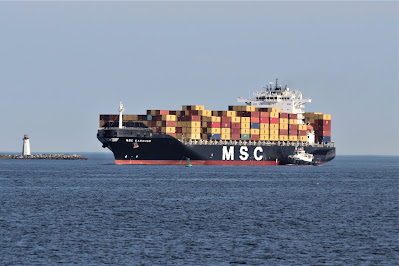 Dating from 2005, the ship was built by Daewoo, Mangalia Heavy Industries SA, to what were then the maximum allowable ships dimensions for the Panama Canal. When it was announced that the Canal would be rebuilt to accommmodate larger ships, hundreds of "Panamax" ships were threatened with obsolescence, including scores of quite new container ships. Not to mention a prospective boom in construction of NeoPanamax ships that would clog shipyards and force shipowners to finance new ships.

Among the threatened ships was this one, which had been launched as Buxpost, but was renamed MSC Carouge on delivery. Owners NSB Niederelbe, with several Panamax ships on its hands, developed a unique method of increasing the ships' capacity. They essentially rebuilt the cargo section by inserting a new centre section lengthwise, thus widening the ship to the new canal dimension. A new transverse cargo section made the transition with the existing bow, also lengthening the ship. A hull fairing arrangement made the transition aft. The bridge wings were extended, and I believe a second wheelhouse was added above the original bridge to provide the mandated forward visibility. MSC Carouge was the third ship to receive the treatment at the Huarun Daedong Dockyard in China.

NSB applied for a patent for the process, which increased the ships' capacity dramatically, as well as its stability. Although its speed was reduced somewhat, it still operated efficiently. Instead of going to the scrap yards early, the ships are expected to remain in service for normal lifespans. There is little evidence of this process except toward the stern where the unusual fairing appears below the superstructure. 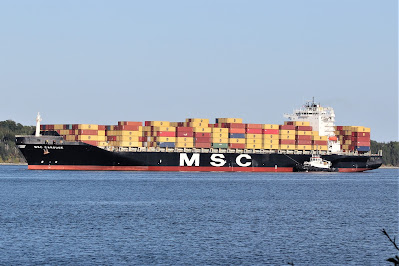 The ship apparently was renamed Buxwind between 2014 and 2016, presumably during the period when it was rebuilding, and reverted to MSC Caarouge in 2016.