Seeing two cruise ships in port is not unusual during the height of the cruise season in September and October, but it is rare in the mid-summer. Therefore today's two ships was notable.

The familiar Caribbean Princess arrived on its usual itinerary from New York (July 27) and Saint John, NB (July 31) as it begins its seasonal shift from the Caribbean and its Port Everglades base. 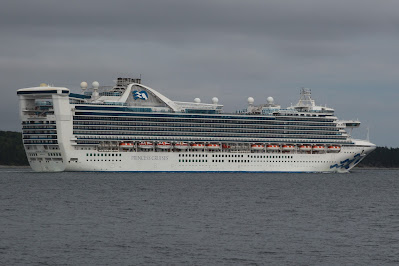 The big ship, at 112,894 gt, was built in 2004 by Fincantieri, Monfalcone and has become well known for its unsual lounge perched out over the stern. (It has thus acquired the nickname "the Shopping Cart"). The Carnival brand Princess Cruise Lines (operating in the Holland America Group) claims a passenger capacity of 3142 lower berths (3600 total berths) and 1200 crew on nineteen decks.

The other ship is not familiar, and in fact is a first time caller. Nieuw Statendam was built in 2018, by Fincantieri Breda in Marghera. The 99,902 gt ship has a capacity of 2,666 passengers (in lower berths) with a crew of 1053. If all berths are occupied it has a maximum nunber of persons on board of 4,173. 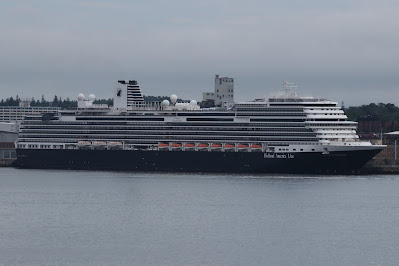 The ship is on a lengthy repositioning trip that orginated in Copenhagen July 16. It called in Alesund, Norway July 18, then to Iceland with stops in Akureyri July 20, Isafjordur July 21, Reykjavik July 22, Grundarfjordur Jul 24 then to Qaqortoq and Nanortalik, Greenland July 27 and 28 and St.John's Newfoundland July 30. The cruise will end August 3 in Boston.