Cruise by another name, another CFIA inspection and box data 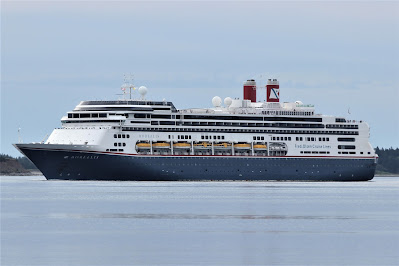 In my opinion, one of the best looking of the present day cruise ships, it was  built in 1997 as Holland America's Rotterdam, under which name it called in Halifax several times over the years. The 61,849 gt ship out of the Fincantieri Breda yard in Marghera has a capacity of 1,404 passengers with a crew of 600. It was renamed and entered Fred. Olsen service just over a year ago in July 2021. 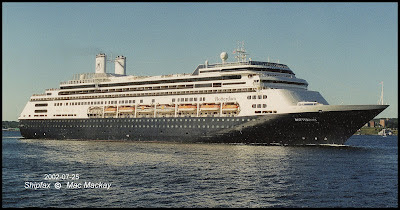 Miraculously for a ship of its age, it has survived the recent carnage in the cruise industry, which saw many ships going to scrap, often before their time. Olsen seems to have the right formula for the ship and their red funnels and red hull line improve the ship's looks even more (perhaps making up for the oversized windows in the observation lounge above the bridge.)

Another morning arrival today was the tanker Dalmacija from Antwerp. It anchored in number one anchorage in the lower harbour to allow the Canadian Food Inspection Agency to inspect the ship for the larvae of the invasive species LDA moth. 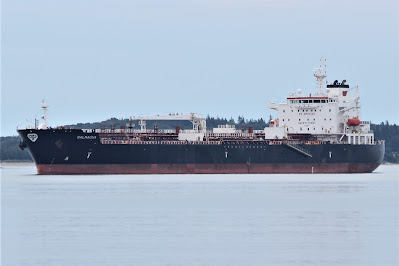 The Dalmacija is operated by Tankerska Plovidba DD, based in Zagreb, Croatia. The company owns eight tankers and manages a further seven (of which this is one). Although Croatian shipyards are noted for their tankers, this one was built by SPP Shipbuilding Company, in Incheon, South Korea in 2015. It is a 29,678 gt, 49,991 dwt MidRange type chemical/product tanker.

Interestingly the ship appears to have made the transatlantic voyage in ballast. Recent shifts in trading patterns mean that European ports such as Antwerp are no longer exporting refined product to Canada as they did until recently. (Much of Imperial Oil's local supply was coming from Antwerp). Instead Europe is now importing crude oil and refined product from abroad due to the loss of supply of crude oil from Russia.

Following clearance from the CFIA the ship will be sailing for a Montreal and is due there August 20.

Typical of lots of import tonnage, but lighter export tonnage is today's departure of ONE Hangzhou Bridge for Port Said, Egypt on THE Alliance's EC5 service.

The 96,790 gt, 96,980 dwt ship still had some meters of available draft, but it appeared that its 9120 TEU capacity was well filled by volume of containers. Built in 2012 by IHI Corp in Kure as Hangzhou Bay Bridge for K-Line, it was renamed in 2021 when its operation was folded into ONE, Ocean Network Express, with the container ships of MOL and NYK Line. It was also in 2021 that the ship received its magenta hull paint colour which seems to be standing up generally, but touchups stand out (see the area below the bridge where tugs and pilot boats likely make contact.)