Neither fog nor rain...

Shipfax is not the US postal service, so fog and rain and other conditions such as heat and gloom of night, certainly do prevent complete coverage of activities in Halifax harbour. Fortunately fog and rain such as that experienced today, August 2, are not constant, so the odd glimpse of ship movements is possible.

The auto carrier Oberon arrived yesterday, August 1, from Southampton, UK on the Wallenius Wilhelmsen transatlantic route. (Previous ports were Goteborg, Bremerhaven and Zeebrugge). The ship berthed first at Pier 9C and disgorged a huge quantity of machinery and a variety of odd shaped and oversize general cargo on Mafi trailers. The latter included large crates and at least one helicopter. As of last evening when the following photo was taken the ship was still offloading. (They had to unload and reload a good many cars to get access to all that cargo).

There was already cargo on the pier from the last ship, so the area is now quite crowded. Non automobile cargo is offloaded at Pier 9C as generally only automobiles and light trucks are handled at Autoport, which is set up to service cars and load them on multi-level enclosed rail cars or delivery trucks.

This morning when the Oberon was ready to move to Autoport, the fog had reached legendary density (over the water) but was a little clearer on Pier 9C. It was still too thick to see across the Narrows. 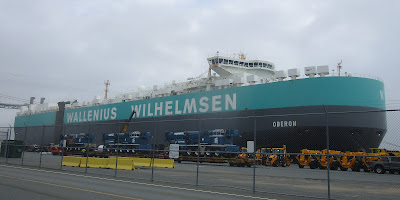 The blue cranes for the Sarens crane rental company, arrived on a previous ship as did at least some of the yellow JCBs. Crews are lashing down the cranes on rail cars.

It may be too much to hope for clearing when the ship departs Autoport for New York later this afternoon. However if it does, a photo may magically appear in this space.

Oberon is classed as an LCTC (Large Car and Truck Carrier) of 71,673 gt, 30,134 dwt with a capacity of 7620 RT43 autos. It was built by Daewoo Shipbuilding + Marine Engineering Co, Okpo in 2008 and is equipped with a 320 tonne capacity stern ramp. It is owned and operated by Wallenius Marine in the co-owned joint venture Wallenius Wilhelmsen Ocean (WWO) formed in 2017.

Wilhelm Wilhelmsen of Norway and Wallenius Lines of Sweden orginally joined their operations in 1999. The land based logistics and other operations were split off in 2017 and the shipping group got its own identity as WWO. The ships have been repainted in a common scheme of teal over gray replacing the orginal green hulls of Wallenius and red/orange of Wilhelmsen.