It was back into the weeds and wildflowers again to get a photo of the US flag autocarrier Liberty which arrived at Autoport this morning (August 26) from Southampton. [See the August 23 post for Morning Lena.] 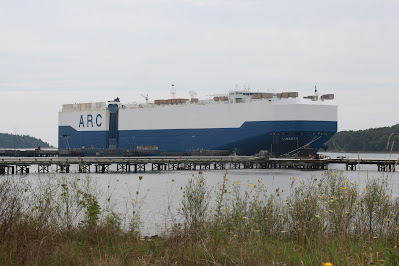 The ship was built by Mitsubishi Heavy Industries in Nagasaki for Wilhelm Wilhelmsen in 2006. It operated as their Topeka until 2017 when it was acquired by Americian Roll-On Roll-Off Carrier (ARC), renamed, and placed under the United States flag, and managed by TOTE Maritime. [TOTE is part of Saltchuck, which also owns Tropical Shipping, Foss Maritime and scores of other businesses in Alaska, the Caribbean and Hawaii.] ARC however is part of the Wilhelm Wilhelmsen Group, along with EUKOR.

As a US flag ship it is given priority status for US government cargoes, but as a foreign built ship it does not qualify under the "Jones Act" for coastal trade within the United States. ARC has nine other US flag RoRos and has several regular trade lanes including a Europe/US transatlantic route from Southampton and Bremerhaven that does not usually serve Halifax.

This is what the Topeka looked like in 2014, in its original colour scheme. (Higher belt lines from those days have been replaced with a semi- "hip hugger" style.)