Today's (August 7) arrival on THE Alliance's EC5 service is the Conti Contessa, a regular on the run for the last eleven months. Built as Ital Contessa by Samsung, Koje in 2006 it measures a hefty 90,449gt, 101,007 dwt with a considerable container capacity of 8084, including 700 reefers. It became Conti Contessa in 2019 under Conti11 Schiffahrts ownership and Niederelbe management. 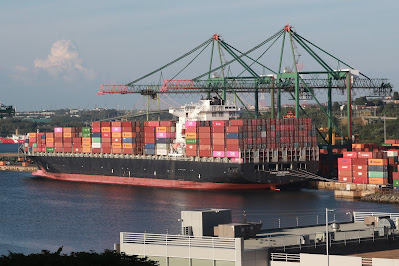 The ship arrived from Norfolk, eastbound, and is relatively lightly loaded (see the top of its rudder peaking out from under the counter). It has lots of boxes aft (probably empties) but as far as payload is concerned it is obvious that the balance of trade is still cargo from the east and not to the east.

Although it is not felt on this particular route, there is a major shift underway to re-route cargo away from the congested West Coast of North America, in favour of the east coast via the Panama Canal - to the benefit of such ports as Savannah - and eventually possibly Halifax. The BigBox retailer Costco has even gone to the extent of chartering three ships for its own cargo. They will be calling in Halifax starting next month according to recent reports.