1. A few rays of sunshine strike Aurora as she arrives this morning - the last the passengers will see today. 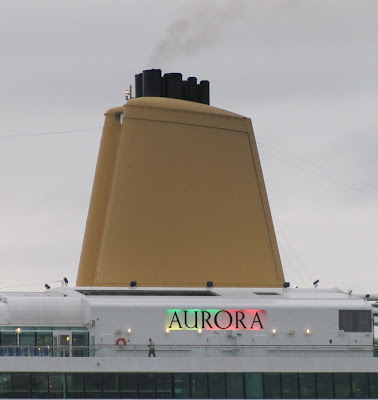 3. A little bit of neon sets off the traditional P&O funnel.

No splashy super graphics for P&O (it just isn't done old chap.) No, just clean, uncluttered lines, minimal decor and a traditional funnel colour.
Aurora, despite a sometimes spotty performance record, is still a striking ship.
Bring on more, I say.
Built in 2000 by Meyer Werft of Papenburg, Germany, the ship has experienced numerous mechanical breakdowns, viruses and other ills. This can be traced back to the champagne bottle which Princess Anne swung to christen the ship that failed to break. [Please note it was not the Princess Royal's fault - I am told she has a very good arm.]
Her original owners, P&O, merged into Carnival in 2003, and that company has had the good sense (as with their other British acquisition, one Cunard Line) to keep the brand identity separate from Carnival.
The ship can carry 1950 passengers, and measures 76,152 gross tons. Her normal cruising speed is 24 knots, but she can operate for extended periods at 26.5 knots for world cruises. She is supposed to have hit 29 knots on trials.
Her arrival at dawn this morning regrettably was soon followed by the arrival of fog and drizzle, nothing new perhaps for her largely British passenger list.
Posted by Mac at 11:01 PM