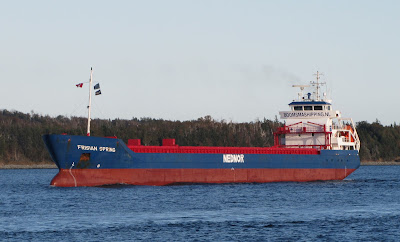 Frisian Spring tied up at pier 31 for another load of timber utility poles bound for Ireland. The ship had to dawdle off the pier for a while until the cruise ship Norwegian Jewel cleared the berth.
The poles have been coming in by rail except for eight truck loads that arrived this week. The poles come from Eugene, Oregon and are bound for Drogheda, Ireland.
Frisian Spring was built by Port Weller Dry Dock in St.Catharines, ON (hull no.81) The yard lost money on the job and was forced into bankruptcy when it was unable to complete subsequent orders for sister ships.
Posted by Mac at 9:27 PM