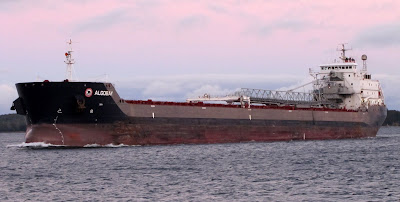 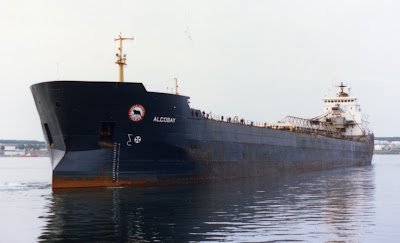 The Great Lakes/ Seaway size bulk carrier Algobay returned to Halifax this evening after a lengthy absence-and therein rests a story.
Built way back in 1978 to carry coal, iron ore, salt and grain, the self-unloader emerged from the Collingwood Shipyard, constructed to maximum permissible Seaway size (at the time.) She was the first of a new Nova Scotia class, with hull strengthening allowing her to trade to a limited degree on the east coast, and with a splendid looking bow built for navigation in ice.
Early in her first year of service, while leaving Sept-Ies, QC, she collided with the bulker Cielo Bianco, crushing between them, the tug Pointe-Marguerite of Eastern Canada Towing. Two of the tug's crew died when it sank.
The ship was a frequent caller in Halifax with grain from the Lakes often loading out gypsum.
In 1987-88 her hull was further reinforced to upgrade her to Caribbean class. This permitted her to sail farther afield along the North American east coast, with trips to the Bahamas and Florida.
In 1990 the ship was reflagged Liberian at Shelburne, NS and sailed foreign until 1993. In 1994 it was chartered to Canada Steamship Lines and renamed Atlantic Trader, to carry coal from the US Great Lakes to Belledune, NB and backhaul gypsum to Montreal.
Years of hard wear, including corrosion from cargoes, resulted in her layup in Toronto at the end of the 2002 sailing season on December 25.
Late in 2007, her owners Algoma Central Corp announced that the ship and fleet mate Algoport would be rebuilt in China with a new forebody and propulsion system. In preparation for the tow to China her engines and unloading boom were removed, she was heavily reinforced, and special towing gear was installed on her bow.
She left Hamilton, ON May 13, 2008 in tow of Commodore Straits with Lac Manitoba and Vigilant I and was handed over in Montreal to the tug Hellas. At Gibraltar on June 16 the tug Simoon took over the tow. There were delays before and during the Suez transit (which required four assist tugs) and then off India Simoon had engine trouble and was replaced by Seahorse 7. They finally arrived off Shanghai early in September 2008.
Changxi Shipyard in Jiangyin built the new forebody to new Seaway maximum dimensions. They also replaced the original Pielstick (Crossley built) engine with a new MAK and made various other improvements, including a stern launch lifeboat.
The ship left the yard in December 2009 and sailed under her own power across the Pacific and reached Portland, ME December 30, where she wintered.
The ship entered full service this spring and her first year has not been without incident. She grounded once approaching Sault Ste. Marie and once entering the St.Lawrence River from Lake Ontario. Extensive bottom damage resulted from both incidents, and she required lengthy drydockings to replace bottom plates and repair structural damage.
The ship is now jointly owned by Algoma Central Corp and Upper Lakes Group, and will see year round service on the Lakes and farther afield.
Fleet mate Algoport did not fare as well. She sank en route to China, so her new forebody will require a new aft end and superstructure, which is now under construction in China.