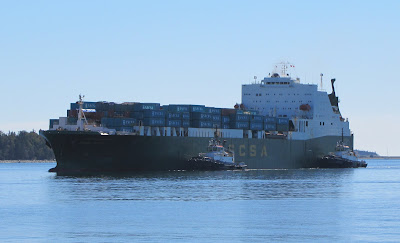 2. As Saudi Hofuf is lined up to back in to pier 31 she shows off her huge stern ramp in its stowed position. Her side hatch is just forward of the banner letters, and can be picked out by the drain ports below the flush fitted hatch cover. 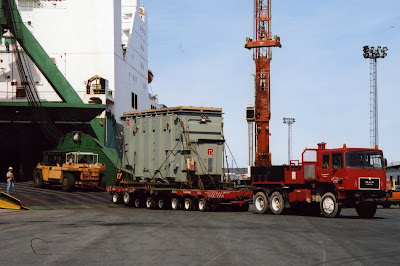 3. In this file photo a transformer is driven off the stern ramp on a transporter trailer rated at 110 tonnes. A.W.Leil's M.A.N. prime mover tractor arrived in Halifax on board a Saudi ship.
The National Shipping Company of Saudi Arabia (NSCSA) has been a regular caller in Halifax for many years. It brings in some cargo, but usually takes away oversize loads such as machinery and containers.
Saturday's visit by Saudi Hofuf may have been an exception, because I did not see its huge stern ramp in operation, as it may not have loaded any RoRo cargo. This very useful ship can carry 2310 containers, 534 cars and a variety of heavy and oversize RoRo cargo. The immense stern ramp has a capacity of 400 tonnes. A smaller side ramp can carry 90 tonnes.
Built by Kockums of Malmo, Sweden, as far back as 1983, the ship will probably be kept running for many years, since this type of vessel is very expensive to build. Similar to (but smaller than) the Atlantic Container Line ships, there has been talk of replacements, but none are on the horizon so far.
Posted by Mac at 10:40 PM