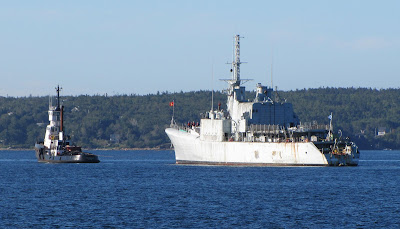 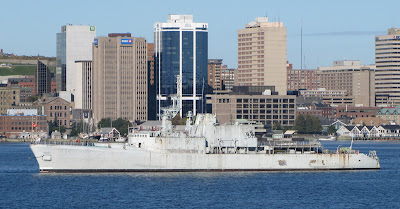 The last of the St-Laurent class destroyer escorts left Halifax on a tow line Monday September 6. HMCS Fraser was built by Burrard Dry Dock Co Ltd in Vancouver and commissioned in 1957. The first Canadian designed and built anti-submarine vessels, the St-Laurents were world leading vessels, with a distinctive appearance and a lengthy and distinguished naval service record.
Fraser, third vessel in the class, and first built on the west coast (and named for a western river), was based in Esquimalt and served as a Destroyer Escort (DDE) until 1965 when she came east. Canadian Vickers Ltd in Montreal converted her to DDH (helicopter carrying) capability and she recommissioned in 1966.
She was given a life extension, called DELEX in 1981-82, also at Canadian Vickers Ltd, and then became a test bed for several weapons systems. She finally paid off in 1994 and was used as a floating classroom until sold in 1997 to be converted to a museum in Bridgewater, Nova Scotia.
Funds could not be secured for that role and she was returned to the navy last year. Her presence in Bridgewater had become an embarrassment and an eyesore. The museum interests continued to try to save the ship, including a court challenge in the last few weeks. It now seems certain however that she will indeed be scrapped.
The last of the "steamers" still afloat, she is bound for Port Maitland, Ontario, in tow of the tug Tony MacKay (see Tugfax.)
Posted by Mac at 9:54 PM