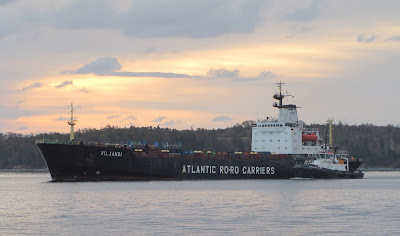 1. Viljandi approaches the Halterm container terminal with the tug Atlantic Willow coming alongside.

One of the shipping lines that calls in Halifax from time to time is Atlantic RoRo Carriers. They operate a service between St.Petersburg, Russia and Baltimore. The line also calls in Halifax, New Orleans and Houston if there is cargo.
There are several ships in the fleet, but the classic is Viljandi, one of the last bow loading RoRo ships still trading on the North Atlantic.
Built back in 1978 it carries a modest 242 TEU but can carry up to 125 x 40 foot trailers or 493 cars. There were several of these ships operating for the USSR, out of Estonia, which used to carry the infamous Lada automobiles.
Viljandi arrived early this morning and was due to sail again before noon.
See www.cisnav.com/ for specs of the ship and a profile drawing showing the bow visor open.
Posted by Mac at 12:05 PM