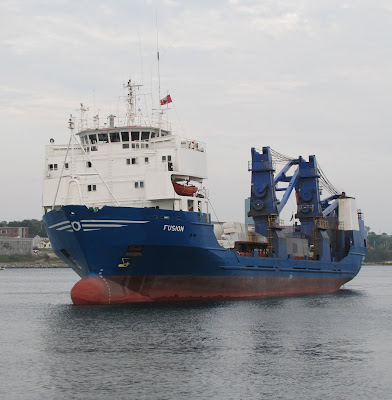 The shuttle service between Halifax and the French island of St-Pierre et Miquelon has been assigned to the ship Fusion flying the flag of St Vincent and the Grenadines, but owned and operated by Ukrainian interests.
The ship is a familiar one, having previously operated on the same run as Fort Ross starting July 18, 2007.
The ship was built in 1977 by Blohm & Voss in Hamburg and has carried numerous names in her lengthy career. After a major refit in Europe, she was renamed Fusion earlier this year. She is now looking at a three year charter to run to St-Pierre.
The ship can carry bulk cargo, general cargo and RoRo and has two 30 tonne cranes. Her maximum container capacity is 319 TEUs.
She takes over the St-Pierre run from Svendborg (see previous post) which was just a fill in, after Dutch Runner completed her contract and went off to do charter work for Desgagnés.
She is shown above approaching pier 9 on Friday September 3 to tie up in advance of Hurricane Earl. She was loaded and ready to sail when the hurricane passed, and left on Sunday.
Posted by Mac at 9:37 PM