Out and In at Halterm 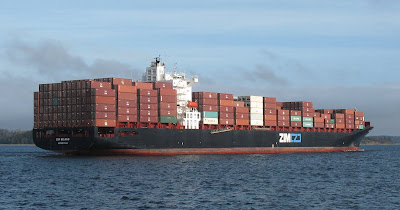 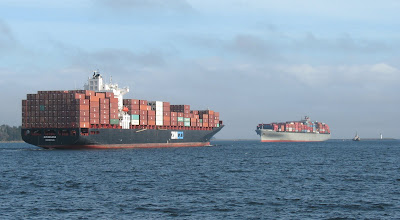 2. Meeting east of the Middle Ground. Atlantic Larch is approaching Tsing Ma Bridge to make up on the starboard side. 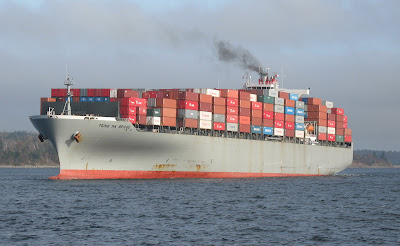 3. Tsing Ma Bridge preparing to make her turn to back in to Halterm. 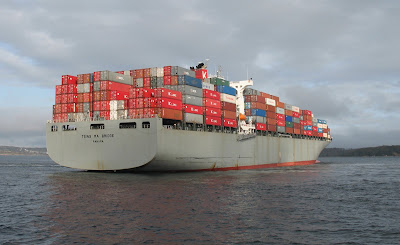 4. Backing in to Halterm (the tug has gone round to the port side - see Tugfax for more on this.)


It was quick turn around at Halterm this afternoon. Zim Beijing sailed and Tsing Ma Bridge arrived in quick succession. The ships provided an interesting contrast, due to their relative sizes.
Zim Beijing is Panamax size. Her dimensions (both length and width) are the absolute maximum that can pass through the Panama Canal as it is presently configured. She measures 294.1m length x 32.6m breadth, and carries 5047 TEUs. Her gross tonnage is 54,626 and she was built in 2005. The ship's size allows her to follow Zim's Asia/ North America/Middle East service, without passing through the Suez Canal.
Tsing Ma Bridge is a post-Panamax ship. Her dimensions are too large for the Panama Canal. She is 284m long x 40m wide. Her capacity is 5610 TEU and she measures 68607 gross tons and was built in 2002. She is too broad to pass through the Panama Canal as of today, due to her width. Interestingly she is shorter than the Zim Beijing, but can still carry 563 more TEUs - a substantial number. The ship runs from Asia, via the Suez Canal to the east coast of North America for the K-Line operated CKYH service with Cosco, Yang Ming and Hanjin.
When the present reconstruction of the Panama Canal is completed Tsing Ma Bridge will be able to transit with ease, as the new Panamax dimensions will be 366m long x 49m wide, allowing ships of some 12,000 TEU to pass through the locks.
The two ships reflect the importance of China in today's shipping: Beijing, the capital of China and Tsing Ma Bridge which joins two islands in Hong Kong.
Posted by Mac at 7:23 PM