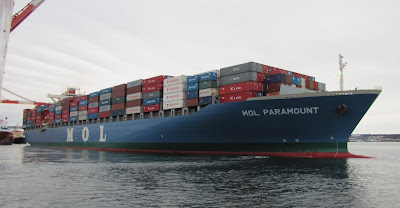 1. MOL Paramount gets away from pier 42 at dusk. In the background Algoma Dartmouth bunkers Oceanex Sanderling at pier 41. The ship shows symbols for two bow thrusters, and only needed on tug on the stern to get off the berth. 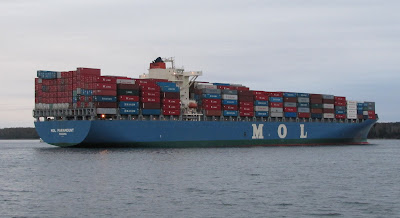 2. MOL Paramount gets up to speed slowly.

The CKYH Alliance, run by K-Line and including Cosco, Yang Ming and Hanjin has been gradually increasing the size of ships on their AWE-4 service since May. Previously operated with eight ships of 4700 TEU capacity, the service has now been increased to nine ships of at least 5500 TEU.
At the same time the number of ports has also increased, so they are still calling in Halifax weekly. The port rotation is Ho Chi Min City/ Shekou/ Hong Kong, Yantian/ Singapore/ Halifax (via Suez Canal)/ New York/ Norfolk/ Jacksonville/ Savannah/ Singapore.
With the increase in number of ships, K-Line actually reduced its ships in the service to seven and partnered with Mitsui OSK Line (MOL) to provide two ships. This effectively joins MOL's SVE (South Vietnam-US East Coast) service with the AWE-4 service. MOL also operates the New World Alliance with APL Singapore and Hyundai Merchant Marine.
That is a long winded explanation for the arrival today of MOL Paramount, a 71,902 gt behemoth, built in 2005 and carrying 6350 TEU. While it doesn't appear much larger than the other post Panamax ships we see in Halifax, this one is a full 13m longer (at 293.19m) and the same 40 m width. This means one complete container bay at the maximum width of the ship. It carries containers 15 wide on its decks. OOCL's post-panamax ships are in the 5888 TEU range (280.54m x 40m.) MOL Paramount is powered with a MAN-B&W main engine of 85,000 bhp and can do 25 knots. However on this service, with nine ships, it will likely steam at slower, more economical speeds.
Built by Koyo Dockyard in Mihare, Japan, MOL Paramount flies the Panamanian flag-even though it cannot pass through the current Panama Canal.
Posted by Mac at 9:02 PM