The RoRo container vessel Oceanex Sanderling will be heading to Europe for a refit this week. To take its place, Oceanex has chartered the British flag Thebeland, which arrived Sunday morning. Its first scheduled sailing is February 4 for St.John's/ Corner Brook/ Halifax.

When Oceanex Sanderling returns to service, Thebeland will move to the St.Lawrence route (Montreal/ St.John/s) to fill in for Cabot while it goes for refit. This will take until May 31. 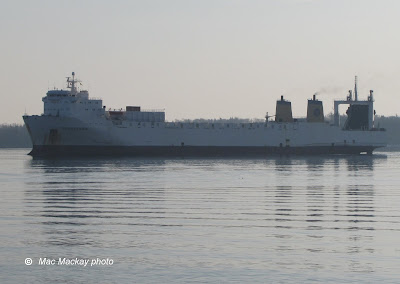 1. Although it appears to be a larger ship, Thebeland has a similar capacity to Oceanex Sanderling. 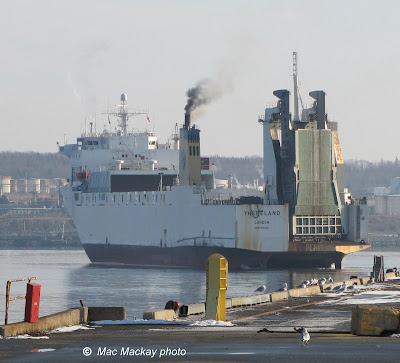 2. Thebeland has a fixed stern ramp on the quarter, whereas Sanderling's ramp can rotate. This will mean a different loading process at pier 36.

Thebeland's particulars are very similar to Ocean Sanderling, so it should be a good match in terms of capacity.
Thebeland built 1978 Japan, 20,881 gross tons, 1027 TEU, 190.34m LOA, 16.5 knots (2 screw.)
Oceanex Sanderling built 1977 Japan, 21,849 gross tons, 1127 TEU, 193.5m LOA, 17 knots (single screw.)
Thebeland is also an ice class vessel, so it will be able to handle winter conditions in the Gulf and the St.Lawrence if necessary.
Addendum: Oceanex was granted a coasting license by the Canadian Transportation Agency. The basis for this is that no Canadian flagged vessel was available. The license allows Oceanex to use a foreign ship to trade between Canadian ports, which is not normally permitted under Canadian cabotage regulations. There is no requirement that the ship employ a Canadian crew under these circumstances.
Posted by Mac at 10:12 PM