1. The steamship Halifax on the St.Lawrence River in 2005, with a full load of iron ore

The port city of Halifax has been the namesake for several ships over the years, but that number will be reduced by one in the next few weeks. On April 21, 2011 the Canadian registry of the ss Halifax was closed, and the ship will soon head for scrappers on a tow line. The tug Sirocco is due in Montreal May 23 to tow the ship to Aliaga, Turkey.

The steamship Halifax was built in 1962 at Davie Shipbuilding in Lauzon, QC as hull number 638. Commissioned in May 1963 it was named Frankcliffe Hall by the owners Hall Corporation of Canada, Montreal. Hall was a major Great Lakes shipping operator of the time, and the ship was built to take advantage of the recently completed St. Lawrence Seaway. It measured 730'-2" long x 75' wide, the maximum dimensions for transiting the locks. Although modern in many respects, it was powered by a traditional Pametrada steam turbine, built by John Inglis Co Ltd of Toronto. It developed 9,000 shp, and geared through a single fixed pitch propellor giving a reported speed of 17 knots.

The "— cliffe Hall" naming scheme was unique to Halco, and in this caser the prefix "Frank" was chosen to recognize Frank A. Augsbury Sr, founder of the company in 1923. The ship was what is known as a straight decker in Great Lakes parlance, meaning a gearless bulk carrier. Engaged primarily in grain and ore hauling, it ran between the head of the lakes and as far east as Sept-Iles. It also had its wheelhouse forward in the Great Lakes tradition.

In the 1980 the ship was taken in hand by Port Arthur Shipbuilding, in Thunder Bay, ON and converted to a self-unloader. The superstructure for the gear was mounted aft, and necessitated raising the funnel to ensure that exhaust gases were kept clear. The conversion also involved raising the ship’s main deck, thus increasing her tonnage. The added freeboard and hull stiffening allowed the ship to venture out of the Gulf of St.Lawrence and come to Halifax with grain, and load gypsum as a back haul. As a result Frankcliffe Hall was the only maximum size laker, with wheelhouse forward, ever to call in Halifax on regular trading.

By the late 1980s Halco had fallen on hard times, and in 1987 the ship was chartered out to Canada Steamship Lines for a year. At the end of the year CSL bought the ship as the Hall fleet was sold off and the company wound up. It was at that time that she was renamed Halifax.
The ship continued calling in Halifax, and even wintered over here in 1990-91. In 1991 she made 8 trips in with grain and loaded out gypsum 5 times, but as more modern ships were available, the ship’s visits decreased each year. Her last visit was in 1996 when she took out one load of gypsum. 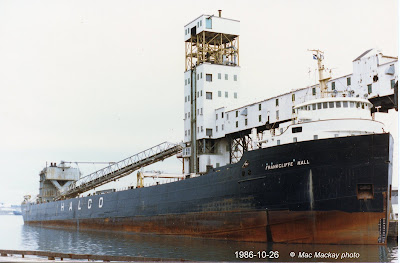 
At the end of the 2008 season the ship was laid up in Montreal and has been idle ever since. In April she was re-registered in Liberia and she was prepared for the overseas tow. As the only member of what might have become a "Halifax" class of ships had others been similarly converted, she was a memorable vessel. She gave a little taste of the Great Lakes to Halifax, and served her owners well for over forty years.
Posted by Mac at 8:03 PM