Double Header at the Cove 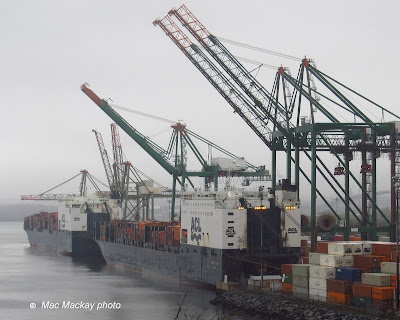 1. Atlantic Cartier at the west berth (nearest the camera) and Atlantic Compass at the east berth this afternoon.

The ships of Atlantic Container Line are regular callers at the Fairview Cove container terminal operated by Cerescorp. There are usually two visits per week, with one ship eastbound and one ship westbound. The visits usually occur on Sunday and Tuesday, but these can vary.
So it is relatively rare that there are two ACL ships in port at the same time.
Early this morning Atlantic Cartier arrived and tied up at the west end of the pier. Later in the morning Atlantic Compass arrived and tied up at the east end of the pier.
Although ostensibly sister ships, they were built by different yards for different owners, and a close study of the photo will show some differences in the superstructures and the deck fitting and ramp structures.
Atlantic Cartier was built at the Chantier du Nord, Dunkirk, Frnace, in 1985 and was initially owned by Cie Generale Maritime SA under the French flag. CGM was one of the original partners in the Atlantic Container Line. The ship's boat deck (immediately below the wheelhouse) is substantially longer than her fleet mate's, and shows a much larger accommodation space. As built it measured 25,362 gross tons.
Atlantic Compass was built in 1984 by Kockums AB of Malmo, Sweden for Rederiaktiebolaget Transocean, and measured 25,348 gross tons.
As built, the ships had a container capacity of 2157, of which 725 could be carried on the car deck. Alternatively, large numbers of cars or trailers could be carried.
In 1987 the ships were lengthened by Hyundai Mipo Dockyard in Ulsan, Korea, with the additional of new container cargo section. They emerged with a capacity of 2908 TEU. At that time their gross tonnages were recalculated. Atlantic Compass's present gross tonnage is 57, 255 and Atlantic Cartier's is 58,358 reflecting the greater enclosed space in the accommodations. As such they are still the largest RoRo container ships in the world.
During the lifetime of the ship's their ownerships have changed but as of 2002 all ships in the ACL are owned by the Atlantic Container Line, which is now part of the Grimaldi Group.