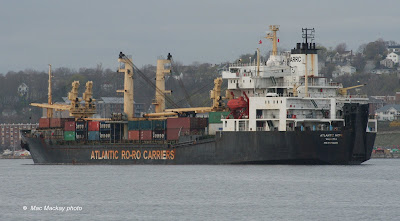 The ships of Atlantic Ro-Ro Carriers are usually in port for short periods of time. In fact, some have only been in port for a few minutes. The line is Russian owned and runs between St.Petersburg, Russia and Houston, TX with stops along the way. When Halifax is a stop it is for only for a very limited amount of cargo, and the ship usually arrives and sails as soon as possible.
This afternoon 's arrival of Atlantic Hope is a break from the norm, since the ship went to anchor for the night and will berth at Halterm in the morning.
Built in 1987 by VEB Warnowerft, Warnemunde, in what was then East Germany, it is one of the noted Astrakhan Mark I general cargo RoRos built for the USSR. These ships were built with high grade steel, ice class, extreme endurance range and a versatility of cargo handling to permit civilian or military use. The ship is fitted with 4 cranes of 12.5 tonne capacity and traditional derricks: one 125 tonne jumbo and two 25 tonne. [The later Mark III type had all cranes.]
Carrying a relatively modest 533 TEU it can also carry 232 cars or 81 trucks or 90 TEU trailers., in addition to substantial general or bulk cargo. Thus gross tonnage comes out as 15,893 and deadweight 18,020 tonnes.
The ship has had nine previous names, but started live as Baltiysk for the Baltic Shipping Company of St.Petersburg. Current owners are also based in St.Petersburg, but the ship now flies the Maltese flag.
.
Posted by Mac at 8:06 PM