All change at Autoport 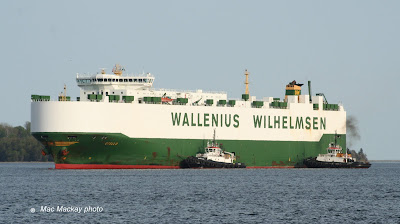 The autocarrier Otello spent the day at Autoport unloading, then moved to pier 31 to unload some cranes. Meanwhile Oceanex Sanderling waited patiently for the berth to be free to go in and load automobiles for Newfoundland.
Otello, 60,942 gross tons was built in 2006 and flies the Swedish flag.
Oceanex Sanderling, 21, 849 gross tons, was built in 1977, but looks quite splendid in its new paint, which was acquired in its recent refit in Gibraltar. I still think the guy who painted the name on the bow and stern should seek alternate employment.