OOCL Britain, port side to. 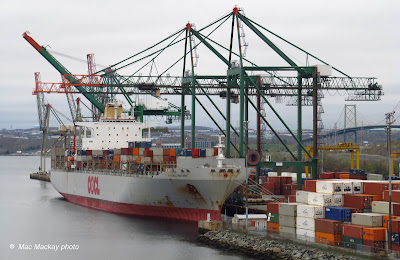 The OOCL post-Panamax ships that call at Fairview Cove almost invariably tie up "starboard side to". To do this, the ship must turn off the berth and back in. This also allows them to leave bow first, and requires slightly less maneuvering and a straighter departure.

The two post-Panamax cranes at the Ceres Terminal are also stationed at the west end of the pier, so the ship ties up at that end.

It was a bit of a surprise today to see OOCL Britain alongside "port side to". I could detect a diver's boat under her stern, but this was not possible to capture on film. No doubt there was a very good reason to tie the ship up in this way.

Also the ship seemed to be extremely lightly loaded.