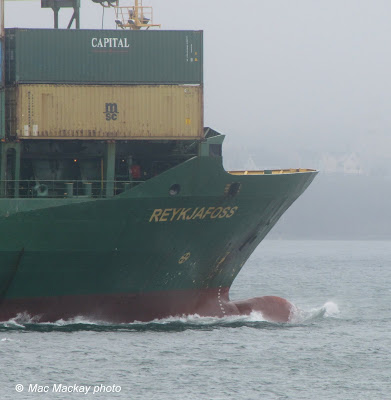 2. The place where her anchor is supposed to be.


The small container ship Reykjafoss, a regular caller in Halifax lost power off Argentia, Newfoundland April 29 and went aground. She was freed and towed into Argentia by tug.

When the ship left Halifax on April 28, she was missing one anchor. It is hard to know, but perhaps that anchor might have been helpful in the circumstances.

The ship is on charter to Eimskip, the Icelandic shipping company, and plies a regular route between Iceland, Canada and the US.

Eimskip has announced that they have chartered the ship Berta to make one trip while Reykjafoss is out of service for repairs.

They have also hired Blikur to pick up the continaers from Reykjafoss in Argentia and deliver them to Iceland.

No location for repairs to the ship has been mentioned.

Reykjafoss was built in 1999 and carries 730 TEU, and has two 40 tonne cranes. It had engine trouble off Halifax Apriil 25, 2008 and had to go to anchor for repairs. It has carried seven names for its German owners in that time, but has been Reykjafoss since 2005.