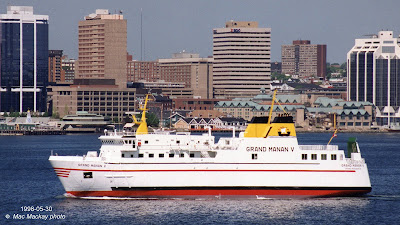 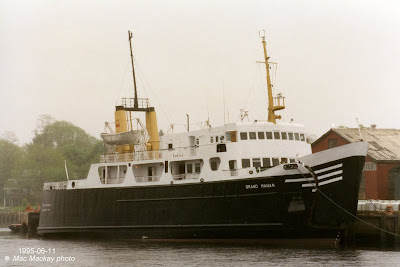 The only operational ferry between Black's Harbour, NB and Grand Manan Island was taken out of service yesterday after a grounding incident.

As the Grand Manan V approached the wharf in Black's Harbour, NB, and was preparing to berth, it is reported that there was a failure in the bridge controls and the ferry ran onto a ledge, in the falling tide. Worse still, the ship's bow became jammed under the pier and the ferry started to list. At one time the list was reported to be 10 degrees, with one of the props clear of the water.

The crew responded quickly with life rafts and a nearby fish farming scow was pressed into service and all passengers were evacuated safely. The crew then managed to free the ship by reversing at full power, but this damaged the pier and the ship's bow. However the ferry was able to berth and all vehicles were eventually unloaded.

According to press accounts the ship is damaged below the waterline and its bow visor is also damaged, which restricts it to stern loading only.

It may take several days to get the old ferry Grand Manan re-certified and operational. When it was laid up September 12, 2010 it was held in reserve as back-up, but was not expected to sail again since the new ferry was due in spring. The new ferry's May delivery has been delayed to June, so the old timer may well be in use for some time once it is brought back into service.

Grand Manan is much smaller than Grand Manan V, so fishing companies, trying to get their product off the island and long week-end tourists will be severely inconvenienced.

For a photo and general account of the incident see:

Grand Manan V was assembled in 1990 by Bodewes Scheepswerft "Volharding" in Hoogezand, from components built by Niestern Sander BV of Delfzijl, Netherlands. It has a passenger capacity of 320 and carries 64 cars.

Update: Grand Manan entered service Thursday May 19. Many fuishing boats made the two and one half hour trip to Black's Harbour to pick up much needed baot, but also to transport groceries, newspapers, other staples and even passengers. Unfortunately large truckls are not able to use the ferry, and these emergency delivery trips will continue until normal service is resumed.
Grand Manan V will head to Pictou, NS for repairs which are expected to take at least a week.
.
Posted by Mac at 1:50 PM